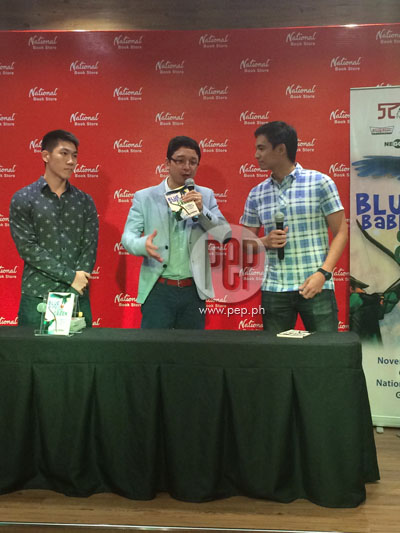 Atenean Chris Tiu and La Sallite Ty Tang grace the launching of RJ Ledesma's book that traces the roots of the rivalry between their schools.

Entrepreneur RJ Ledesma recently launched his book Blue Babble, Gang Green: An Ateneo-La Salle Rivalry, which first came out in September 2014 and had its second printing in November.

The book launch at the National Book Store, Glorietta 1, was organized by Anvil Publishing.

The book is a collection of essays that traces the roots of the rivalry between Ateneo de Manila and De La Salle and relives the epic hardcourt battles between the Green Archers and Blue Eagles teams.

True-blue Chris was proud and happy as he shared the story of his friendship with the "green-doctrinated" author.

He recounted, "When I was still a little kid... he was the editor-in-chief of a men's magazine and I always thought of RJ as very intelligent, very articulate and creative.

"That's why all the while I thought he was Atenean."

This elicited a lot of laughter from a mixed crowd of Ateneo and De La Salle alumni.

Chris then turned his attention to Ty, his "teammate not just since high school but even elementary and we've been through so much, so many championships and struggles together also."

LIFE'S METAPHOR. Chris also expounded on how basketball helped broaden his view about life. "The game has really taught me so many things. I always say that basketball is a metaphor of life.

"Sometimes we cannot learn these values in the classroom but through basketball we're able to acquire certain qualities that allow us to succeed in life."

The baller, in fact, is an accomplished businessman, commercial model, politician and TV host.

He also expressed his gratitude to Xavier and Ateneo "because they always reminded us to be men and women for others. I always try to live it in everything that I do."

ANIMO! In a brief speech, Ty said, "One thing that really makes me so proud about being a La Sallian is that every time we step into that court and see all the people cheering for us, win or lose, they're still there."

The former De La Salle point guard who now plays for Rain or Shine Elasto painters added, "Whatever happens, after the game, when we go outside, they still try to be with us, to lift our spirits and try to be positive about everything.

"Same way in life, there are gonna be ups and downs. One good experience from being a La Sallian and having the community that I have is everywhere I go, I bring that with me, that Animo spirit.

"And eventually I try to remember those times, especially those moments when I am down and having hard times in my life, I bring that with me and try to be strong and have faith."

Ty recalled his memories of his collegiate playing days, specifically La Salle's winning years, "I felt it was kinda bittersweet when we won the match, when Ateneo and La Salle played in one season.

Like Ty, Chris became even more popular in the UAAP games.

He recalled, "2008, that was the year when we won the championship... finally after six years.

"What made it even sweeter was the fact that we beat La Salle in the finals of my last year.

"It opened so many doors for me also, that's why I guess I am doing what I am doing now."

"I see myself in them, because they are also so involved in the school rivalry but what's nice with the both of them is they were actually teammates, best friends back in high school.

"That best exemplifies the rivalry. On and off the court, rivals are not... magka-kaibigan din naman, eh."

So even if one side bleeds green and the other blue, Francis emphasized, "It's not naman bad blood, it's just a rivalry that we all live with, but at the end of the day, we're all still friends."

He related, "I'm very happy for RJ and I'm very proud of him. Reading through the book, just portions of it, I haven't read the whole thing yet, I can really say that what RJ has written are all factual.

"I have seen so many UAAP seasons all throughout my life and played in four, any Ateneo-La Salle game is something to watch.

"Nothing beats the Ateneo-La Salle championships. The rivalry has evolved to more than just basketball."

He concluded, "I'm glad that RJ wrote this book because all La Sallians and all Ateneans and all other people will actually enjoy reading it because you'll laugh and say, 'Oo nga, ganito nga talaga."

Vice Mayor Francis and RJ Ledesma are in the process of proposing to the TV networks a concept for a talk show that will focus on men's interests.