Senator Miriam Defensor-Santiago: “Sometimes a joke is much better...because it illumines the situation." 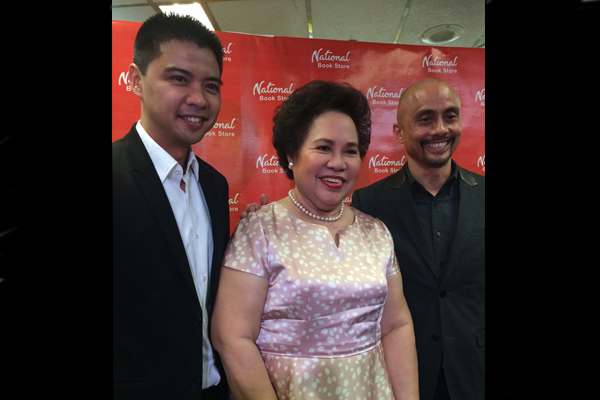 Not for nothing has Senator Miriam Defensor-Santiago been dubbed the Platinum Lady, the Tiger Lady, the Dragon Lady, and the Iron Lady of Asia.

She has just released a book called Stupid is Forever that tells it like it is.

Her latest book is a collection of her rib-tickling jokes, witty one-liners, funny pick-up lines, acerbic comebacks, and impassioned speeches.

Famous for her candor and ballsy dares, the senator is known to turn a simple press interview or privilege speech into a raucous event.

Her book launch, to cite an instance, at the Trinoma branch of the National Book Store last December 3 was meant to be a modest affair of 200 expected guests.

But people started turning up as early as 9 a.m. and continued to fill the store to overflowing capacity past the scheduled hours.

They were there not just to gawk at the feisty senator as her book was literally flying off the shelves when there were still people outside the store jostling their way in.

CROWD DRAWER. As the launch started, her opening remark, “I would like to thank all the millions of stupid people in the Philippines because they inspired this book,” drew a loud applause from the people inside the bookstore.

Ever in command of any situation, she then said, “I am not going to speak very long because I really would prefer that I shall have pictures taken with everybody who is here. If we can just organize ourselves so that we can do it as quickly as possible...”

Those who didn't have pre-signed books but still purchased copies of the book were the ones who cheered the loudest.

She continued, “As I said, I will not take long because I will pretend that I was not introduced as the President of the Philippines in 2016.”

The crowd went wild, of course. The press and TV crew, fully aware of the two-hour limit due to her health, waited patiently by the side and watched as the senator graciously chatted with the people and accommodated their request for "picture, picture."

During the brief press interview, she was asked to comment about the huge crowd at her book launch.

She replied, chuckling, “Well, nothing in particular. I just want to say that I did not expect this.

“Kaya this will show any one of the following things: number one, that there is a dearth of humor and that people appreciate humor or number two, they want politics to lighten up or number 3...”

She paused as a glass of water by her side suddenly toppled over and quick as a buck, she reacted, “Excuse me, I think there is a flood where I am standing.”

THE POWER OF HUMOR. Continuing, she expounded on why she agreed to publish Stupid is Forever.

"In our own way, in our own indigenous method, using humor, we can see the situation better.

"Particularly in the test-tube politics where everything seems to be taken so seriously and, at the same time, they do not get to the very crux of the matter.

“Sometimes a joke is much better than a punch line because it illumines the situation, gives you a worldview of the situation taking place in our country.”

She then looked each of her audience in the eye and said, , “And if we laughed more and took ourselves so seriously less, then I think the public debate would be much better for our insights."

2.3 MILLION LIKES. Will the senator publish another book of this nature?

She grinned and said, “Well, this one is Stupid is Forever, maybe the next one is about morons. There's a difference, you know?”

She then said after the laughter died down, “Most of all, I think people just want to have pictures to post in Facebook, otherwise, in the social media.”

“Because that's the best way of communicating these days.

"Anyone who wants to run for president in 2016 must make sure to use the social media in the proper way as accepted by the netizens.

"Otherwise, they will spurn you, notwithstanding that he enters their domain."

Lastly, from the woman who has one million followers on her official Twitter account @senmiriam and 2.3 million likes on her official Facebook page Senator Miriam Defensor Santiago, a warning:

“You have to communicate in a certain way. You don't just enter social media for your own benefit.”