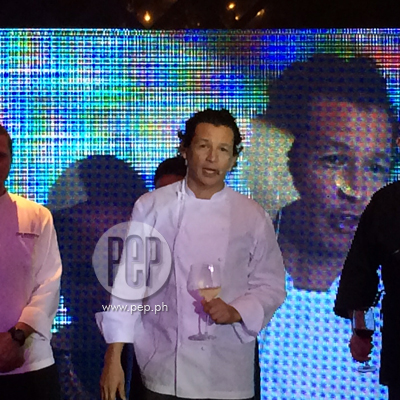 Internationally-renowned chef Bobby Chinn talks about what makes his Manila visits memorable: “Hanging out with the people here, I can eat phenomenal food anywhere in the world but I don't get to meet many people as wide, from different affluence from rich to poor than I do in the Philippines, and that is priceless.”

The cross-country adventurer known as Chef Bobby Chinn, who has taken on the world one plate at a time, was recently in the Philippines for the first annual Epicurean Masters Festival.

We sat down with the world-famous celebrity chef (he cooked for for former U.S. President Bill Clinton) backstage before he presented his dishes to the sold-out audience at Old Manila, The Peninsula Manila.

He recalled the last time he was in the Philippines, five to six months ago, after Ocean Day when he worked with World Wildlife Fund to bring awareness to the protection of the coral reef triangle.

It was a very special trip, he said, as his work helped local fishermen whose primary livelihood comes from the seafood in these areas.

The recent trip was a bit different in nature as he was raising culinary appreciation to epicurean levels this time around.

ONLY IN THE PHILIPPINES. We asked Bobby about his first impression of the Philippines.

He said, “There are really quite a few moments scattered all over the place. I went to a night club with a couple of friends and I'm having a great time [and this is something as you get older], you say, 'I used to do that!'"

He turned a bit more serious and related the story of a man who gave him a bunch of rice sweets during this trip, “because his wife couldn't make it. That's a five-hour journey to give me something. That is the kind of stuff that happens when I'm in the Philippines.

“Hanging out with the people here, I can eat phenomenal food anywhere in the world but I don't get to meet many people as wide, from different affluence from rich to poor than I do in the Philippines, and that is priceless,” he added.

Bobby also confessed, “I'm a creature of habit, when it comes to the Philippines, I hang out at cafes with Gene Gonzalez [of cafe Ysabel in San Juan].”

And whenever he is in Manila, he makes sure to carve out time for people, especially those who like his shows and have become his friends through the years.

“So I go out of my way to meet them, I set a day for them if they wanna meet and ask me questions.”

The constant traveling has taken a toll on his digestive system though.

Bobby admitted, “I'm turning into a health freak so the last time I was here, I went to The Farm and I spent five days there and they treated me with just... I mean, I felt guilty to be there, they were just too kind to me and I felt really sad to leave!”

Being the creature of habit that he is though, he promptly “re-toxed” after meeting up with his cafe buddy Chef Gene Gonzalez.

He also mentioned his love affair with Filipino food, pointing out kare-kare as a favorite, “it's so good they named it twice,” he joked.

“I'm really a sucker for the adobo and there's a debate where you have chicken or pork adobo but I usually have the chicken."

REINVENTING THE STANDARDS. He knows that even if it is traditionally Spanish, his next favorite is something he has come to love when he is in the Philippines—the inclusion of squid ink sauce in our dishes.

He feels that because it's Spanish in origin, even if the food is really good, it's just difficult to market because culinary experts will say it's Spanish.

Bobby elaborated, “Egyptians have the same problem...a lot of the food is actually Turkish, so the Egyptians lost their culinary identity to the Turks, while Filipinos lost it to the Spanish.”

Despite that, Bobby does see a possibility of reworking and creating something new with Filipino dishes.

He explained how he sees it, “I read some of the Facebooks and blogs of the Filipinos I've met over the years and there's kinda this renaissance of popularizing classic dishes and ingredients.

"I think I would like to do that here because I think I can because I get it.”

His advantage is that he brings a global experience, something he said, “most people don't get to get because of my show, and so I recognize the privilege of that.

"Learning from really great chefs, this is one of those professions where you never stop learning. It's really humbling because people come to me and tell me, you can do certain things.”

THE JOY OF TRAVEL. Living back in London since 2013, Bobby said that while he is based there now, what he hasn't given up is traveling.

“When you get on an airplane from one country and get off in another, some people would detect the weather immediately, some the smells.”

For example, to him, getting off an airplane in the Philippines, what he always experiences first is the hospitality and friendliness of Filipinos.

He added, “It's not a beautiful city, let's face it. It's as pretty as Bangkok. But I don't get care how beautiful a place can be if I'm with miserable people, it doesn't add up to much.

"Here, there is just an incredible kindness and generosity. I can't describe in words.

“I like London very much, I love London. It's one of the great cities of the world—great architecture, great theater, great museums, great music, great food. But the weather is a killer.

“If I could spend my winters in Southeast Asia, I think I could be a very happy, very satisfied human being.”

He joked during the second night of the Epicurean Masters that if he could only find people willing to invest in his restaurant, he'd be more than happy to open one in the Philippines.

But right now, he is focusing his energies on what he calls his small, ambiguous, Vietnamese, tapas-size place House of Ho in London's SoHo district.

He added a disclaimer that one does not mess with the Ho in London.

He also has his work cut out for him filming shows like World Café Asia on the Travel and Living Channel, which he described, “kills me...that is literally like 10 takes of eating foie gras," so his producers would get the right shot of him enjoying the food, even if he is stuffed.

“I gained 2 kilos. I started weighing myself. I was having acid reflux and indigestion,” Bobby remarked, dispelling the myth that food shows are all fun and easy.

“After I filmed two seasons, I wanted to tell them, 'I want to travel the world and do detoxing!'”