Solenn Heussaff engaged but not ready to get married yet, "Not soon... Definitely not." 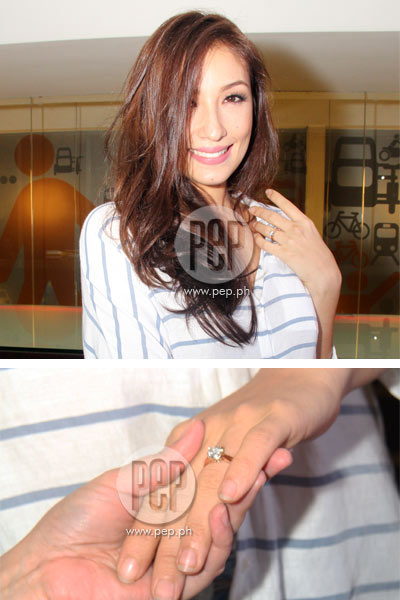 Solenn Heussaff reveals she cried when Nico Bolzico surprised her with a wedding proposal, "Akala ko next year or two years pa." (To view photos of her engagement ring, CLICK HERE)

First she was surprised and then she cried when her boyfriend of three years Nico Bolzico proposed to her last December 11.

Solenn Heussaff was glowing when she showed off her engagement ring for the first time to GMA-7 and PEP.ph (Philippine Entertainment Portal) during the VIP screening of Kubot: The Aswang Chronicles 2.

The GMA-7 actress exclaimed during the interview, "Akala ko next year or two years pa."

She narrated that the "very casual" proposal on December 11 took place at the house of her parents.

"   She then related how Nico turned what would have been another routine day in their lives into something special.

Did she cry during the proposal?    She did, "Parang namatay na ang singlehood ko."

Solenn intoned how amazed she was that her Argentinian boyfriend was able to keep his plan a secret from her for so long.

She described her boyfriend Nico as "super traditional" that he first asked the permission of her parents to marry their daughter before proposing to her.

NOT SOON. The actress-TV host said she wants a "quiet" wedding, "You will know 'pag out na ang pictures. Gusto ko private."

She further revealed her preference to hold it in a church outside the Philippines.

"Destination wedding, and I will make it sure it is very far," quipped the 29-year-old actress.

Have they started planning for the wedding?

And the wedding date?

"Not soon," she stressed. "Definitely not."

ON HAVING KIDS. For Solenn, nothing much has changed since she got engaged to Nico.

Does she believe in marriage?

"I believe in marriage, but I believe that it's hard work."

Aware that there are people who reject the idea of cohabitation among unmarried couple, Solenn commented, "We are in a Catholic country and people have different ways of doing things.