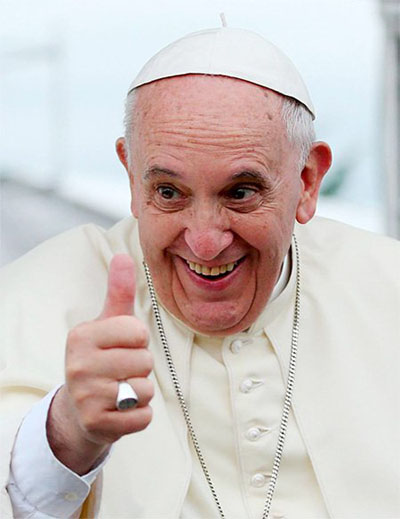 Before becoming the pope, Jorge Mario Bergoglio worked as a sweeper, a bouncer and a teacher. He used to dance the tango and even had a girlfriend.

After 10 long years, a pope has once again come to the Philippines. Pope Francis' five-day visit (January 15-19) has brought solidarity and hope to the Filipinos.

The charming 78-year-old Pope, known for his humility and aversion to materialism, has lived a colorful life as Jorge Mario Bergoglio.

Here are some interesting facts about Pope Francis.

WORKING CLASS. The Jesuit. The Story Of Francisco, The Argentine Pope is the only book about Bergoglio before he was elected pope in 2013. It is based on two years of conversations Sergio Rubin and a fellow journalist, Francesca Ambroguetti, held with then-Cardinal Bergoglio, but isn't strictly a biography.

Bergoglio grew up in a working class family in Argentina and cleaned the offices of the accounting firm where his father worked; he was later given an administrative job.

While attending industrial college, he worked in a chemical laboratory.

BAR BOUNCER. He also worked as a bouncer in a bar in Buenos Aires, Argentina, when he was still a student, he told a group of parishioners informally.

This went viral, with many social media users dubbing him as the “coolest pope ever.”

HE USED TO TANGO. "Do you know how to dance tango?" he was asked in the book, The Jesuit.

"Yes, I danced it as a young man, although I preferred the milonga," he said, referring to a faster-paced country music said to be the early roots of tango.

HE HAD A GIRLFRIEND. Bergoglio also said he had a girlfriend, a former neighbor. They used to go dancing with friends.

Their relationship lasted a few months. The romance ended when the he discovered his religious vocation.

HE WAS A TEACHER. He also taught literature and psychology, which according to Catholic News, has helped him bring back people to the church.

"I greet the San Lorenzo champions," he said, smiling. "The club is part of my cultural identity."

Pope Francis also donated the football souvenirs from his personal collection to Vatican museums. The donations included signed players' shirts and photos of when he met Italian and Argentinian teams in Rome last year.

The memorabilia are on display in a small glass case at the Pinacoteca Gallery in Rome.

HE TOOK THE BUS. The Pope is known to have taken the bus regularly while serving as cardinal in Argentina. He prefers riding in humble vehicles rather than luxurious vehicles.

HIS GREATEST VIRTUES. For Pope Francis, the greatest virtues are goodness, love, and meekness.

In The Jesuit, the Pope said, “I always ask God to give me a gentle heart.

“When I find myself thinking all about myself, I snap out of it, feeling ashamed. I then ask God for forgiveness.”