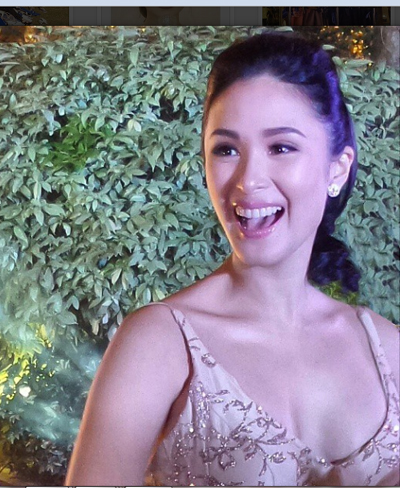 Heart Evangelista braved three hours of rush-hour traffic and endured hunger pangs, to attend her second bridal shower on January 12, 2015, at Fernbrook Gardens in Alabang. Startalk organized the party which was attended by friends, fans, and GMA-7 executives.

Checking #showerheartwithlove on various social media sites will give you snaps of Heart Evangelista's second bridal shower hosted by Startalk, one of her TV shows.

All stories are from sources close to Heart and who attended the event.

1. Heart's friends and fans who came were all done up in old Hollywood glam.

2. All throughout the bridal shower, Heart was very, very, very, very hungry. It had taken her three hours to travel from Quezon City to Alabang—in rush-hour traffic. 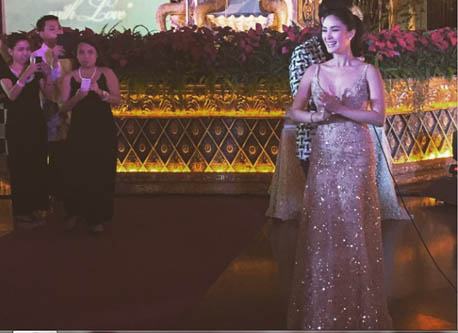 Heart was asked to wait at nearby Starbucks before proceeding to Fernbrook Gardens.

She knew she was going to her bridal shower, but she didn't know who would be there, or how intimate or grand it was going to be.

3. At Starbucks, Heart started to get anxious and asked Arnold, her right-hand man, "What's happening? Why aren't we going in yet?"

Arnold kept stalling, refusing to move or say who they were waiting for.

They were actually waiting for Lovi Poe, who was running late.

4. When Heart was finally allowed to enter the venue, the program started right away, and she wasn't able to eat a thing.

When her bridesmaids asked if her phone messages still made any sense (considering she was so hungry), she said yes.

5. A friend who has known Heart for a long time related that Heart's face brightened up when she saw her siblings at the shower.

When Heart entered the venue, she walked down the aisle—like a bride at her wedding—and immediately saw her guests.

Heart's GMA-7 bosses were all seated at one table, including head of Entertainment TV, Lilybeth G. Rasonable. Heart was very touched that they all made time for her.

Seated at the next table were Heart's non-showbiz friends, including friends of fiancé Senator Chiz Escudero.

Heart's long-time glam team made up of her stylist and make-up artist were also there.

Direk Bibeth Orteza, who is like a showbiz mother figure to Senator Chiz was also in attendance. Donita Rose and Iza Calzado were also there.

6. Between 60 and 100 people attended, excluding Startalk staff who were part of the organizing team.

Heart was grateful to everyone who made the long arduous journey south to celebrate with her. 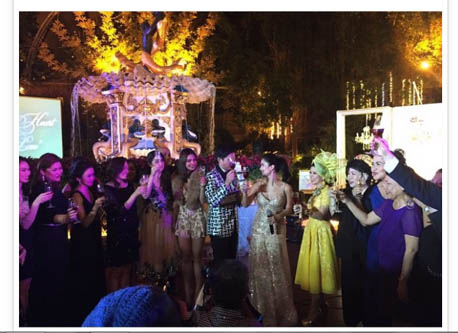 8. Walking down the aisle, Heart got to see pictures of herself as a child, teenager, struggling artist, and bride-to-be.

9. The bridal shower was hosted by Tim Yap and Tessa Prieto-Valdes. The two volunteered to host the party, which really touched Heart. 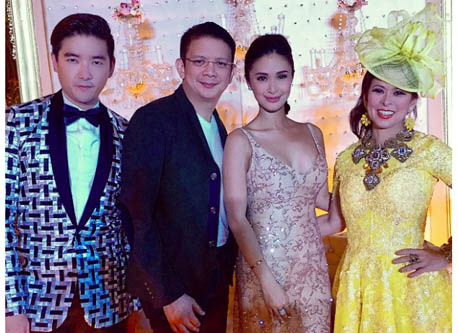 Some 20 people stood up to deliver gifts and heart-felt messages. Midway through the party, they showed a VTR of messages from guests who weren't able to come. This included Startalk co-hosts (Joey de Leon, Lolit Solis and Ricky Lo), Solenn Heussaff, Jennylyn Mercado, Mark Herras, and Chris Tiu.

10. Kris Lawrence sang “All of Me” when Heart walked down the aisle. Kris is one of Heart's co-stars in Sunday All Stars.

11. Bibeth said a few words which made Heart cry.

Bibeth is throwing another bridal shower for Heart at a later date.

12. Everyone who brought a gift, also had a message for Heart. But Iza Calzado forgot to bring a gift, and decided to swipe some pearls from the table. She said pearls reminded her of Heart's elegance.

13. Alex de Rossi and Donita Rose were getting ready at the latter's place when Alex confessed: "I don't have a gift for Heart!"

Donita suggested that Alex bring sparkling wine. But what message would go with the gift?

The other bridesmaids suggested to Alex: "Just say you're giving sparkling wine because when you're in love, you sparkle."

14. Rhian prepared three gifts with three messages: The first is a lingerie set whose subliminal message is, "Babe, come here."

The second is a pajama set so ugly, you wear it when you mean, "Babe, you can't touch me tonight, I'm tired."

The last gift is a sexy, lacy lingerie, sexier than the first, that will definitely get a resounding "yes" when you seductively ask, "Babe, can I borrow your credit card?"

16. Donita, being the most conservative of the bunch, gave Heart a book about getting married.

Donita and Heart are old friends, way back when both were being managed by Angeli Valenciano.

17. Camille, one of Heart's sisters, is notoriously camera-shy and doesn't like to talk in public.

But for this bridal shower, Heart's showbiz friends requested Tim Yap, to acknowledge her presence.

Tim put her on the spot, and Camille gave this message:

18. Towards the end of the bridal shower, Kris Lawrence sang another song and Senator Chiz made an appearance. It was a pleasant surprise for Heart because Chiz never attended her previous bridal showers.

Chiz gave her flowers and a short message. How romantic.