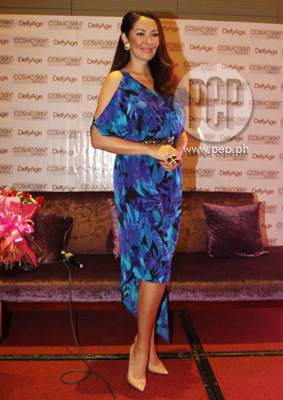 “Our designers are so talented, more talented than other designers from all over the world. Nakikita naman natin na ang huhusay ng mga Pinoy,” says Ruffa Gutierrez, who urges fellow beauty queens to wear gowns created by local designer in international competitions. The1993 Miss World 2nd princess is wearing a Rajo Laurel dress in this photo.

Ruffa Gutierrez shares the sentiment of many Pinoys who were not happy about the national costume worn by MJ Lastimosa at the 2015 Miss Universe preliminary competition.

“Hopefully, they start using Filipino-made gowns for national costumes,” says Ruffa when asked to comment about the issue during the press launch of her new endorsement, Cosmo Skin, earlier, January 23. 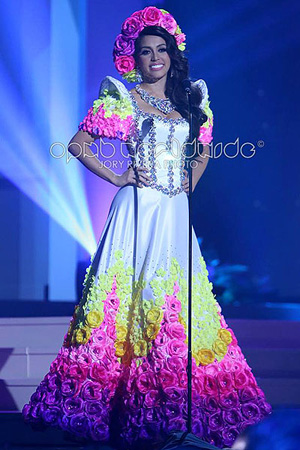 Shortly after the prelims, which was held at the FIU Arena in Florida last January 21 (U.S. time), Pinoys took to social media to express their disappointment.

Cebu-based fashion designer Cary Santiago wrote on his Instagram account (@carysantiago), “Anyone sent for global competition wearing a Philippine sash should wear a Filipino designer. Where is our pride when what we see on stage is totally not a Filipino costume?

Ruffa seconded Cary's statement, “Our designers are so talented, more talented than other designers from all over the world.

The 1993 Miss World 2nd princess then recalled the Sarimanok gown she wore in the national costume competition.

“Ako, I took a stand back in the day, 1993, sabi ko I want a Mang Ben Ferrales to make my national costume. It was Sarimanok.


(Photo from the Internet)

After that, Ruffa stressed, “I think you [fellow beauty queens] guys should really help and support our own designers.”

“I think she's well-prepared. She's been in pageants a number of times already,” Ruffa stated.

To show her support, she and her gay friends will have a viewing party on Monday, Januart 26.

“Of course, being the representative of the Philippines, we're all here to support her.

“I think we also have to show our representative to support her para magkaroon sila ng confidence,” Ruffa concluded.