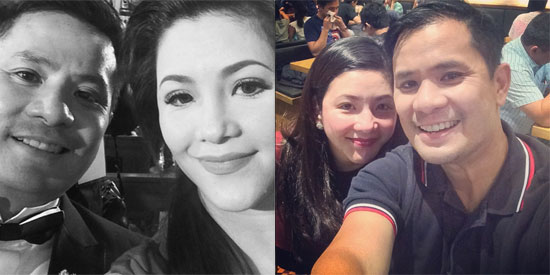 Regine Velasquez on keeping the spark alive in her relationship with husband Ogie Alcasid: “Laughter is very important. Laughter and music, I think. He makes me laugh all the time. He's silly. But it’s a nice kind of silly."

“I married my best friend.”

This is what Asia’s Songbird Regine Velasquez said when asked to describe her relationship with husband, Ogie Alcasid.

The two started going out in November 2003 and they eventually got married in December 2010.

But to this day, Regine shared that they seldom argue because they’re not just lovers, but also best friends.

“It’s nice to have your best friend with you. ’Di ba nung bata ka you can’t wait to be in school?

“You’re excited because you’re gonna see your best friend—kasi may nakalap kang tsismis at ikukuwento mo sa kanya, or may nangyari sa ’yo and you need someone to talk to.

“Ito, you’re here with your best friend 24/7. I married my best friend and I’m really happy about that,” Regine gushed.

At the presscon of the Ultimate Valentine concert held last January 30, PEP.ph (Philippine Entertainment Portal) asked Regine to share some tips on how to make a relationship last and stress-free even after years of being together.

“Laughter is very important in a relationship. Laughter and music, I think. He makes me laugh all the time. He's silly. But it’s a nice kind of silly.”

2. Talk about everything and anything under the sun.

3. Be open about personal differences.

4. Share the highs and lows of life with each other.

“When I was pregnant with Nate, nakakatawa kasi lahat ng doctor's appointment ko sumasama siya. Every week, pumupunta ako [sa doctor ko]. The only time na hindi siya nakasama sa akin, that was the time I gave birth, kasi he had taping. It was just a random checkup na nagkataon lang na hindi ko siya nakasama. Tumawag ako sa kanya, ‘Hon, nasa hospital ako. Manganganak na ako.’ So pack up siya. After an hour he arrived, my parents arrived, his parents arrived and it was a party!”

“We pray before we sleep at night. Nate hears our prayers because we also want him to become a prayerful person. Tapos nakiki-Amen siya [Nate].”