Senator Chiz Escudero gets busy like no groom can: "Halos ako lahat." 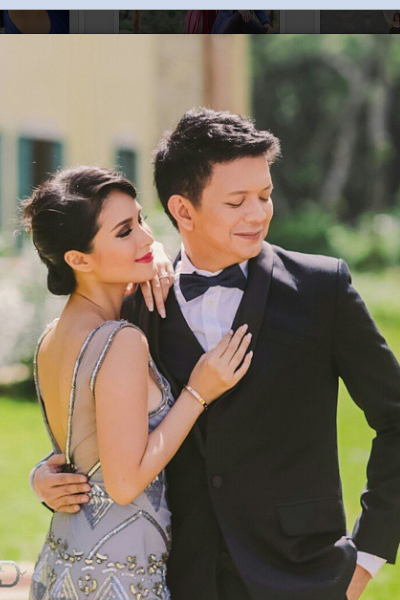 Senator Chiz Escudero on new discovery about fiancée Heart Evangelista: "That she had a huge capacity to do things contrary to what she always says. All she has to do is to put her mind into it. She has delivered and she has come across many times over."

Rarely do you see a groom-to-be actively taking charge of the wedding preparations.

“Halos ako lahat,” Senator Chiz cheerfully stepped in to present himself as such a rare specie.

In an exclusive interview with PEP.ph (Philippine Entertainment Portal) held at the Acropolis Clubhouse Tuesday night, February 10, the senator gave us an idea how he and Heart have been putting together their dream wedding with only their family and closest friends as part of it.

He related, “Basically, she just thought of the motif, the concept behind it, the pegs she wanted to have, the image she wanted to see and I simply implemented it.”

Senator Chiz said it’s better to finalize the nitty-gritty details of the wedding logistics before they fly to Balesin few days from now.

“It's stressful now but it will pay off on the day itself.”

Asked about what he learned about Heart during the process of preparing for their big day, Senator Chiz replied, “That she had a huge capacity to do things contrary to what she always says.

“All she has to do is to put her mind into it.

“She has delivered and she has come across many times over,” he beamed.

For the wedding, Senator Chiz will be wearing a suit created by Paul Cabral, while Heart’s wedding dress is designed by Dubai-based Filipino designer Ezra Santos.

The senator further shared that he was the one who picked “The Luckiest,” a sound track of the romantic movie About Time, which will be played when he enters the venue for their Catholic wedding ceremony.

“Obvious ba, bakit ako the luckiest?” he happily remarked, referring to how lucky he feels to have Heart as his partner in life.

Heart, for her part, chose Gary Valenciano’s "How Did You Know" as the song for her bridal march.

In a previous interview with PEP, however, Heart mentioned that Mr. Pure Energy will not be present during her wedding in Balesin, but he’ll definitely get to sing at the couple’s Manila wedding reception on February 18.

READ: Heart Evangelista wants her wedding vows to be spontaneous