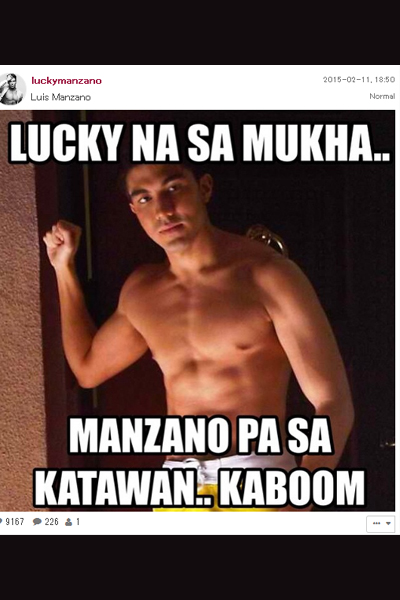 What is Luis Manzano's most successful business venture to date? He says it's not his almost 200 taxis, "...ang pinakamalaking negosyo ko is yung kaguwapuhan ko, and so far ha, walang kalugi-lugi! Hakot lang nang hakot ha. Mukha at laman!" One of the recent photos he posted on Instagram echoed what he said.

Feng Shui personality Maritess Allen recently revealed how the actor-host-endorser is one of her most avid clients, changing his house arrangement every single month.

She nicknamed him “kulit,” because of this anecdote, which Lucky himself shared, "Oo, kulit.

“Alam natin Ms. Maritess travels pretty much all over the world at any given time. Pero yung messages ko sa kanya, tuluy-tuloy!

“May disclaimer ako when I message her, sinasabi ko palagi, ‘Sorry for being kulit ha!'”

But is feng shui effective?

INVESTMENTS. Business wise, Luis has been very lucky for the past seven years. He is an owner-partner of a taxi company named LBR (the L is for Lucky, of course).

Maritess did caution him should he decide to expand his business endeavors, "If it is already his original business which he started in the past, if it's continuing, okay.

"Pero if it's shipping line, from the road to the sea, hindi yun puwede kasi it's out of tune, so disconnected."

LOOK BACK. He described 2014 as very happy because "ang dami kong nagawa...I've been very, very blessed in every aspect of my life—from family to business to showbiz work to love."

He says that 2014 really helped him grow as a person that maturity from within was a big highlight.

"It's basically me, e. Kumbaga, I'd like to think that I didn't really change, I just learned to appreciate everything and everything more as a person and as an artist.

"You realized after doing showbiz for maybe 11, 12 years, the latter part, you become a bit jaded and everything.

"Pero you have to grow as a person to realize that there is so much more positivity, there's something in the world, forgive the term, pero as dirty din as showbiz, that yes, you have to appreciate anything and everything, appreciate positivity."

When asked to recall the hardest thing he overcame, he paused gingerly before answering, "Looking back, wala naman, wala naman, I think everything happened in 2013."

The definite highlight, he said, would have to be his birthday on April 21.

"That was, wow, highlight would be an understatement."

It was also same time last year when he and Angel Locsin reconciled.

"[It] happened in February sa Minute To Win It, that was something extra-special na I never thought and no one thought it would happen and yet it did."

LOOKING FORWARD. This year, Luis is serious about his health and fitness.

To help him achieve his goal of a healthier Luis, he will stop "pigging out on sweets."

He continued, "Kasi that's my Achilles heel, e. Grabe yung sweet tooth ko. So I have to cut down on that.

"In terms of something deeper, siguro I think, I could work harder.

The already hard-working Luis will push himself even more, especially now that his dad, Edu Manzano, has returned to ABS-CBN.

Luis said when his dad left for TV5, it has helped him in a way.

"I hope so. At the same time, I always respect the fact that they will always put our names together. Maybe, it helped me carve my own niche."

But now that Edu is a Kapamilya again, "Dad, welcome back! May ka-kompetensiya na ako sa game show!

"My dad took a long break from ABS-CBN, and kumbaga for him, ABS is always a home.

"And in fact, it's always nice to have a host of that caliber in ABS-CBN.

"Take away the Manzano tag or take away me being a son, I'm a fan of him being a host.

"Yung Game K N B niya, the way he talks to people, the way he handles the show, that's one thing I learned so much as a host din, 'di porke't Daddy ko siya."