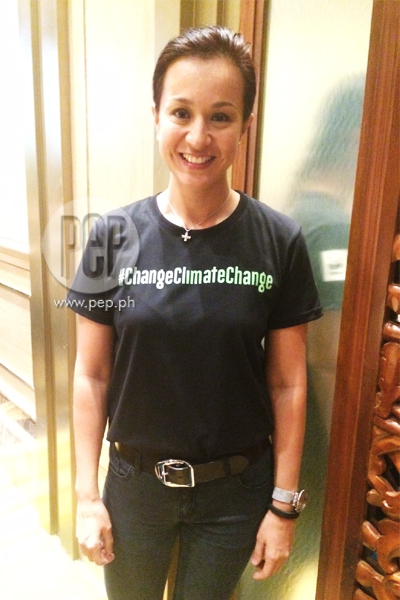 Mikee Cojuangco-Jaworski who represents the Philippines in the International Olympics Committee says, “If we just took more advantage of sports, then we'll realize sports isn't just about medals. It's about the kind of person an individual can become from engaging in sports.”

Mikee Cojuangco-Jaworski may have been keeping herself scarce from the public eye, but she's been busy elsewhere.

The once-active actress/host/endorser has taken on environment and sports on a global scale as the Climate Change Solutions Environmental Steward for WWF-Philippines and the country's representative to the International Olympics Committee (IOC).

At the recent Earth Hour presscon, Mikee told PEP.ph (Philippine Entertainment Portal) that as an IOC country representative, it is her task to interact with her fellow athletes from all over the world as well as get involved with the business and management side of the Olympics.

She related, “I get to see everybody competing.

In the past year alone, she had gone to 10 sports-related work trips.

"That's a lot in a year! One of them was even over three weeks. I'm quite busy actually, come to think of it,” she said.

SPORTS DEVELOPMENT. A bemedalled equestrienne, Mikee believes that sports development is an effective catalyst for nation-building.

She asserted, “I think what we have to realize as a nation is the power of sports in nation building.”

In her assessment, the Philippines has a long way to go in the realm of sports development.

Elaborating, she added, “I think we need to see sports as a priority in the development of our country.

“When you're into sports, you're probably gonna be healthier than someone who is not in sports.

“Whether it's competitive or not, you're gonna be too busy to engage in silliness and vices because you know you have to be fit.

"And you'll probably be a more disciplined person than a person who is not.

“If you want to be better than others, then you need to have an attitude of excellence.

“If we just took more advantage of sports, then we'll realize sports isn't just about medals.

“It's about the kind of person an individual can become from engaging in sports,” she remarked to which we commented that it will be a good platform for her should she decide to embark on a political career.

“Well, I don't know if it would be interesting for me to run!” she retorted.

PUBLIC OFFICE? Her busy family schedule is one reason Mikee has been judicious about her choice of TV projects.

“As far as TV is concerned, not much I think. I do love spending time with my kids.

"I'm also quite picky with the projects that I do and it's not just the type of projects.

“It's also the time that I would need to spend outside of the house versus the output of the project I am doing.

"That's a very big consideration for me.”

As one who hails from a political family, as a first-cousin, in fact, of the incumbent President of the Philippines, has Mikee considered running for public office?

“You know, when I was growing up, I always thought that by now I would be in Congress or Senate.

“It was something that as a young person I felt.

"In a political family as involved as I was at a very young age… I was on the streets at the age of nine, I was delivering campaign speeches by the time I was thirteen.”

She also admitted, “Politics is very second nature to me. It's not always easy but I always saw myself in that direction.

“You spend a lot of time somewhere, you can't help but start to love the place.

"I always saw myself in public service and at a certain point in my life, which was when I was in SK [Sangguniang Kabataan], I realized that this is a hard job.

“The expectations are extremely high, the resources you have to do the job you wanna do are extremely low and there is so much to be done.”

POLITICAL MINDSET. She emphasized that a proper mindset is a prerequisite for any would-be public servant.

She explained, “It's not a matter of, 'Hey, serve me as a constituent.'

“But a lot of people have that kind of attitude, but it's not.

"Because you can't, what we need is more people to realize that for us to be able to demand, we have to do our part.”

She clarified it's not about “them serving us” but “us serving the people.”

“What's harder is to say, 'I need to make a decision right now. This decision will probably benefit the greater good but this decision is easier for me to do.'

“Neither of them are bad decisions, which one do you do?

“Those little decisions, they all add up.

“With the kind of attitude, where we say I'm gonna say I will do something that is gonna benefit more people but my family less, mas madali yun.

“I think it's those decisions that get a lot of people in trouble,” she pointed out.

Furthermore, “Sometimes we don't even notice that we are making those kinds of decisions.

"So there is a challenge in our daily lives and in all the decisions that we make. It's not easy.”

WILL SHE ENTER THE FRAY? From her ponderances, it seems Mikee has one foot in and another foot out of politics. What's it going to be?

“I never ever close my doors on anything, ever, because I've had so many plans for myself.

"So many things that I said I would do that I didn't do and that I said, 'Nah, I don't think I'm gonna do that and I am.'

“All of those things, times when I was taken out of the path I planned, it always turned out better.

“I really just leave it up to God because I feel He has been the one so faithful in bringing me to the places where probably He wants me to be.

"They have never been purely opportunities, they've also been challenges.

“Even this, it's a cause, it's not easy. You just have to do your part," Mikee remarked about her advocacy for climate change.