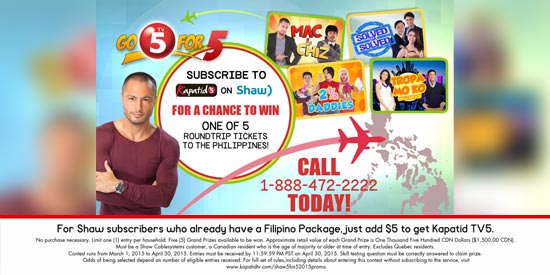 Kapatid TV5 and Shaw Communications’ much-awaited 5 for 5 promo returns on its second year to give Filipinos in Canada more chances to win exciting prices, including five roundtrip tickets to the Philippines, to be won by lucky subscribers.

Last year, five TV sets were given away in the 5 for 5 promo’s initial run.

If you live in Vancouver, Victoria, Nanaimo, Parksville, Duncan, Kelowna, Edmonton, Calgary, Winnipeg, and Prince Albert and already have a Filipino package subscription on Shaw, all you need to do is to add Kapatid TV5 by calling 1-888-472-2222.

For more details on the 5 for 5 promotion, visit THIS SITE.

Pilipinas Global Network Limited (PGNL) is a joint venture between Philippine Long Distance Telephone Company (PLDT), the largest and leading telecommunications company in the Philippines, and TV5 Network Inc. ("TV5"), the operator of TV5, the fastest growing terrestrial channel in the Philippines.

It acts as the sole and exclusive distributor and licensee of the programs, shows, films and channels of TV5.

It distributes these media content via syndication and via its international linear channels.

To be updated with the latest happenings and events of Kapatid TV5 and AksyonTV International, visit THIS SITE or THIS FACEBOOK ACCOUNT.