Chef Boy Logro: the no-English elementary graduate who cooked for a queen, a sultan, a princess, and a president 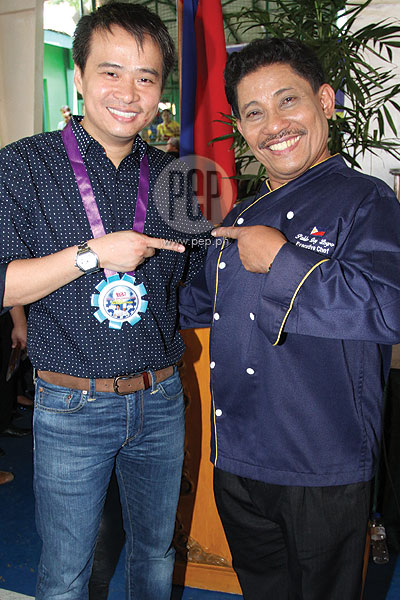 Today, he is well known in the country as a celebrity chef and a cooking show host.

He is the main man of Idol sa Kusina, which is airing on GMA News TV.

He is also an owner of two culinary schools—one in Compostella Valley, Davao, and another one in GMA, Cavite.

A native of Biliran, Leyte, Chef Boy does not hide the fact that he is only an elementary graduate.

But who would have thought that this Ilonggo TV personality would later on become a sous chef at the Sultan’s palace in Oman, Jordan?

Even he himself never thought he would cook dishes for three world-famous people!

He also used to be the executive chef of a five-star hotel here in the Philippines.

It does not stop there.

TESDA AMBASSADOR. As a TESDA (Technical Education and Skills Development Authority) ambassador, Chef Boy also teaches culinary lessons, such as how to whip up dishes, create breads, the proper attitude in the kitchen, to name a few.

He is more than happy to assume his new role, which enables him to share his knowledge to the young people.

Chef Boy also commended TESDA’s programs to teach people for free, an oppportunity he didn't have before.

“During my time, walang trainor, I studied by myself na talagang, wala, e.

RECIPE TO SUCCESS. Now a self-made man, what is Chef Boy’s secret to success?

“I served Queen Elizabeth [II], I served Princess Diana, I served the king of Oman, King of Jordan, President of America George Bush.

Despite his fame, Chef Boy swears to remaining as he was before when he was not yet popular.

And he intends to keep it that way: a good example.

LOVE WHAT YOU DO. His culinary school in GMA, Cavite is his first, and he later on established a big school called Chef Logor’s Institute of Culinary and Kitchen Service in Compostela Valley.

He even joked that the school does not need to use English as its language, given that culinary centres in the country have the reputation of being expensive and for the elite.

Consistently, Chef Boy always reminded that the real secret to cooking delicious dishes is to be happy while cooking.

PEP asksed: How does he remain happy especially in those times he is really tired or has a problem?

“After the show, dun ka umiyak.”

And while, successful people are consistently asked about the secret to success, Chef Boy’s “secret” to success has not always been a secret.