Mikee Cojuangco on looking young: "When we know how to find peace...And I have an amazing husband, spoiler!" 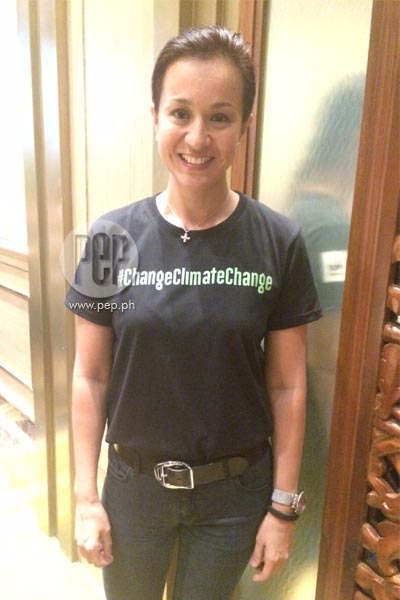 Mikee Cojuangco is on her third year as an ambassador of WWF-Philippines in which she spreads the word about environmental safety, together with other celebrities like Rovilson Fernandez, Marc Nelson, and the family of Zoren Legaspi and Carmina Villarroel.

As WWF-Philippines' environmental ambassador for Climate Change Solutions, Mikee Cojuangco-Jaworski has an active role in Earth Hour 2015, which will unroll in the country tomorrow, March 28.

The ageless beauty, who recently turned 41, said this is now her third year as WWF ambassador.

"I started out as the Earth Hour ambassador and then, on my second year, the whole campaign of WWF became more targeted and specific."

She stated that caring for the environment is a cause "I have been involved with since college."

Elaborating, she said "the advocacies that I support or get into are mostly those that I want to be reminded of, the things I believe I should be doing."

She stressed, "The things I feel will make me a more responsible citizen of this world are the things I really like to do."

The ceremony for the grand switch-off will be held at the Quezon City Memorial Circle, as the city is the host sponsor of Earth Hour in the Philippines this year.

It will be presided over by Quezon City Mayor Herbert Bautista.

Mikee voiced her thoughts about Earth Hour, saying it is, more than anything, "a symbolic reminder of everybody having to be aware that this is not just problems of individuals but a problem of a whole race, the human race."

She emphasized it is a relevant concern "because we are already feeling the effects and the consequences" of environmental neglect.

"We know we can't reverse it but we can somehow put a stop to it," she said.

ENERGY CONSERVATION. Switching off is just one of the many things that people can do to conserve energy.

"I've learned it's an urgent concern, I've learned that there are little and big things we can do and that we are at the very baby stage of where we should be."

At the Earth Hour presscon in Dusit Thani, Mikee wrote on the giant wall her day-to-day application of her own pledge.

"I think it's being more conscious of the things that we buy, how we dispose of our garbage.

"Sometimes it could also be disheartening when we segregate at home and the garbage collector comes and dumps it all together."

She added, "But in a lot of the sites they also do manual segregation, and when we do it at home already, we're also helping them do their jobs and keep them away from potential danger and health risks."

She reminded that "every little act counts."

TEACHING KIDS. For Mikee, it's important to teach the children about preserving the safety of the environment, but it will even better if they do their part early on.

She shared, "I won't just order my kids to do it, I'll explain to them why it's important.

"It's not that I haven't, but I think it's a continuous way of learning.

"Parang small inconveniences in our mind but... it means a lot."

Her best example is what they do with a bucket of water in her household.

"When you turn on the water and you're waiting for it to get warm, it's so easy to think na sandali lang.

"But water is not free. It's not infinite.

"What we do at home, we put a bucket and then, as the bucket gets filled, it's warm and we save that water.

"We use it to flush the toilet or for little things when you don't need the tap."

She related that many times, a bucket of water has been a lifesaver, "When we don't have running water, that one bucket is worth two baths."

AT PEACE. Mikee is the daughter of Margarita "Tingting" Cojuanco, a popular figure known for her beauty in high society and later in local politics.

Thus, she answered, "I think it's unrealistic to say that genes don't have anything to do with it," when she was asked about her youthful looks.

"I'm sure I'm very blessed with good genes that have allowed me to age well."

More importantly, "Whenever I pray, what I really pray for, one of my greatest prayers, is peace.

"I just want to have peace of mind and peace in my heart.

"And I think when we know how to find peace, that kind of peace, then, I think, we won't age.

"It doesn't mean that life is easy, it just means you can find peace when you need and where you need to."

And last, but not the least, "And I have an amazing husband, spoiler!"