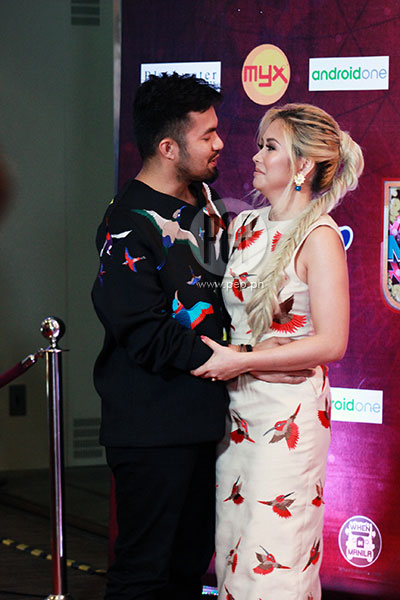 Yeng Constantino has that glow that most newly-married people have, but hers is exceptionally bright and contagious.

At the LinePH launch party held in Gramercy 71, PEP.ph (Philippine Entertainment Portal) caught up with the singer-songwriter and chatted about her married life plus career highlights.

Yeng, along with Daniel Matsunaga and Ellen Adarna, was launched as LinePH's newest endorsers.

WEDDED BLISS. What exactly does she enjoy about married life? What new things about hubby Victor “Yan” Asuncion has she uncovered?

She winked shyly and said, "Ngayon, we live in one home na alam mo yun, when I wake up in the morning, the first thing na makikita ko talaga is mukha niya.

What does she mean by that?

ROAD TRIPS. Adjustments are not uncommon to marriages so we're curious what those are for Yeng and Yan, the nickname of her hubby Victor Asuncion.

She quickly replied, "Not yet, wala pa naman.

"It will be hard for us na mag out-of-town ‘tapos kami lang magkasama."

Moving on, “But now we're married na, so it's easy for us na road trip, ganyan, so we did that."

CHASTITY VOW. Yeng is one of the few celebrities of her generation who has been vocal about the importance of purity before marriage.

We asked her to share how she managed to maintain this mindset despite being in the showbiz world where such values are more the exception than the norm.

She clarified though that this mindset isn’t for everyone.

CAREER. This year, Yeng is celebrating her 10th year in showbiz, we asked her what she has in store for her many fans.

Included in her anniversary plans is an album launch.

“So ayun, abangan lang nila, they will be surprised.

“And ayun naman ako as a performer, as an artist, I want to surprise my fans, my supporters para laging may wow factor na alam mo yun, exciting."

Without pre-empting her plans, we asked her to share a bit more and she smiled mysteriously, "Naku, mahirap sabihin pero it's something different.

“E, I'm just really for passion and sincerity and just really loving my followers, that’s all.”