Rovilson Fernandez on working with David Foster: “He is a much more quotable person than Simon Cowell!” 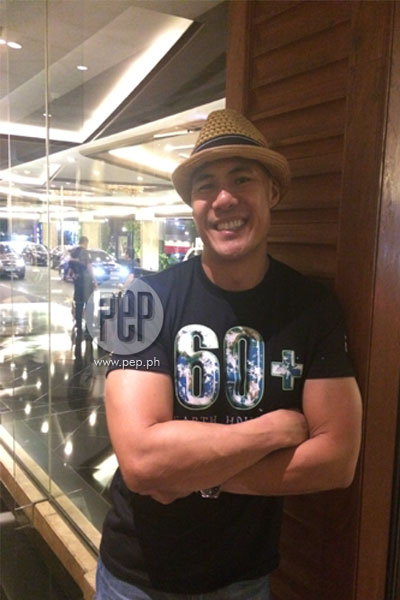 Rovilson Fernandez explains why David Foster is his favorite Asia's Got Talent judge: “Number one, the things he says. Like honestly, after this show, maybe when season 1 is done, I'm gonna write a book and call it Fosterisms... he has better quotes, he is a much more quotable person than Simon Cowell, much better!”

The last time PEP.ph (Philippine Entertainment Portal) spoke with Rovilson Fernandez was shortly after Valentine's Day and he had just ended a relationship.

We caught up with Rovilson last week at the Dusit Thani lobby, just before the Earth Hour presscon and we got some updates about his love life.

We asked how he's doing and what he is looking for in a girlfriend.

He shared, “What am I looking for in a significant other?

“I thought I was gonna do it within the next couple of years, because I'm not getting any younger, although I'm young at heart.”

But with everything that's happening in his career right now, his love life will have to take a backseat.

He explained, “We have just been blessed with a new show, we're so busy with it. All I do is eat, sleep, drink Asia's Got Talent, I have no other time for anything else!”

BEHIND THE SCENES AT AGT. Rovilson also shared some behind-the-scene moments as host of the show.

“We're traveling to so many different countries, it's such an ambitious show that everyday is something new, everyday we're on our feet for 10 hours plus plus,” he said.

But he's not complainng. “Everyday is such an adventure, it's such a treat to be a part of such a wonderful, wonderful, high-octane, super professional show. It's all worth it.”

This isn't Rovilson's first high-octane show as he starred in a season of The Amazing Race Asia, racing with Marc Nelson. The two made it to the top 2 or 3 after leading and winning several legs.

He said, recalling AR Asia, “It's like apples and oranges, comparing these two.

“They're both super stressful, but I think we have a little more responsibility on this show because on the Amazing Race, we were just contestants, we weren't hosts like Alan Wu was."

Rovilson said that in Asia's Got Talent, “we have a lot more responsibility because we're the hosts, we can't mess around.

“We're not an act. We are the stewards and we hold it all together, and we're the two most magulo people I know. It's just weird that we're the face of such an ambitious, ambitious show. But it's an honor.”

PINOY WINNING STREAK. We asked if the Philippines is gonna do well in the show. While the finale is aired live, the portions they have already taped are the auditions and pre-finals.

He smiled mysteriously and said, “Uhm, you will be proud. I can go as far as saying that there are Filipinos that will make you proud, that is all I can say."

He did say that the Philippines has been on a great winning streak. “The last Amazing Race Asia, Filipinos won; the Apprentice Asia, we won; Asia's Next Top Model, Pinoys reached top 3 and we had Joey Mead hosting it.

“You know, Filipinos belong on the grand global stage and they do well.”

Right now, even with all the promo material, Rovilson confessed that he and Marc Nelson still can't believe they've landed such a huge regional job.

He said, “I have to pinch myself.

“Marc and I, we don't pinch each other, we pinch ourselves, just to make sure...

“Like the saying goes, I can't believe this is happening. I never thought I'd say that.

“But I am saying that, and I can't believe it. To be working with... the scope of the show, it's huge. It's massive and we're working with the best of the best.

“True professionals. It's such an honor. My chin is up when I walk, my back is a bit straighter, there is a hop in my step, the sun is sunnier, and I hear birds chirping.”

We teased him that his picturesque speech betrays his romantic nature.

We reassured him that maybe he will find his next love interest among the many Asians he will meet as he continues hosting Asia's Got Talent.

He shrugged and said, “Maybe, I hope so. That's the thing, we're meeting so many, so many beautiful people.

“It's tough. But we're keeping... I mean, my girlfriend now is the show. I eat, sleep, drink nothing but Asia's Got Talent, I know that's a generic answer but I am so into my career right now!”

WORKING WITH THE JUDGES. On the show, Rovilson said he is learning so much about the judges, and this has surprised him in a good way.

He elaborated, “Our relationship with the judges is fantastic. Before the show, I only know them as far as who I have seen on TV, or what I've read about them.

“To be working with them so closely, spending so many hours with them, and finding out that despite being superstars, they are down to earth, they are so normal and we're all in it for the same thing—to make the show really awesome and to find the next superstar. I'm so, so excited.”

While admittedly not a singer, Rovilson said taping for Asia's Got Talent got him into thinking about developing a musical talent.

He confessed, “I wish I could sing. I don't even have to be galing, just enough to carry a tune.

“Maybe I could play an instrument. I see David Foster, during breaks, he'd play the piano, it's like, 'Wow, I could learn to play the piano right?' It just opened my eyes to a lot of new things, musicality-wise.”

He revealed his favorite judge, “Hands down, David Foster. He's so galing.

“I really didn't think, actually out of all four, he's the one I knew the least about, but he wound up being my favorite.”

“Number one, the things he says. Like honestly, after this show, maybe when season one is done, I'm gonna write a book and call it Fosterisms.

“Hashtag Fosterisms because everything he says... he has better quotes. He is a much more quotable person than Simon Cowell, much better!”

What does he mean by that?

“So galing. He really is looking out for you as a talent.

“Even if you suck, he'll let you know you suck, but then he'll say, 'This is what I suggest you should do.'

“He'll tell it straight to your face, 'Maybe you shouldn't be here. But if you wanna keep pursuing your dream, go ahead, so I'm gonna tell you what you should do to help you a little bit and make you happy. You're not gonna be a superstar, but follow your passion.'

“He'll break your heart but he'll still give you good advice about it!”

ALWAYS PROUD TO BE PINOY. After Asia's Got Talent (which has yet to have an airing date), we asked Rovilson if he'll continue to do local shows now that he has conquered Asia.

He beamed and proudly declared, “Absolutely, Asia is home. Philippines is home.

“But we would like to travel around the region because the region is so supportive of us.

“Malaysia, Indonesia, Hongkong—they're so supportive of us so we'd like to be there with them for on-ground events.

“Manila is home, we are who we are because of Manila and we'll never... we're always gonna claim we're proud Pinoys.”