Georgina Wilson on the idea of getting married: "...if I had to plan a wedding right now, I think I might just faint..." 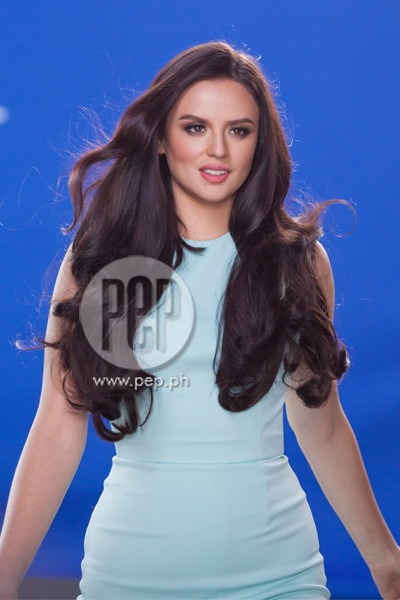 Georgina Wilson quakes at the possibility of a wedding proposal: “If somebody, if a certain someone did propose I just feel that it would be a bit overwhelming right now...”

Several of her close friends are getting married or engaged, is Georgina Wilson feeling left out?

She ripostes, “Are you gonna ask if I'm gonna get engaged?"

Then she resumes, “Oh, it's just so emotional. Even when a friend gets engaged.

“I was just overly emotional, crying, and then my friend that just got married, it was just such a special moment and I'm like, 'Oh my God, life is real.'

“Like we're there. It's a stage that takes a while to be like, 'Oh my God, my friends are getting married and that's the age group that we're in.'”

WISTFUL. She says those were her exact feelings when her partners in Sunnies Bea and Eric Dee got married, “I felt that was my wedding also.

“I felt like we were all getting married, it's really, really close to home. It's so special, because I've been to weddings…

"Obviously, weddings in the family are very different, weddings of friends are...

“It was a feeling that was new to me and she was my first, one of my first best friends to get married.”

As it was an intimate wedding and special, George hints, “That's probably how I would do mine, too.

“It was totally, like there were a hundred people, at most! And they were really just super, super close friends.

“There were other people she would have wanted there but to be able to keep that, what the wedding was and the feel of that wedding, she really had to keep it to just the closest.”

OVERWHELMING. So, is she and long-time boyfriend Borgy Manotoc taking the plunge?

“Ayan na! To be honest, I'm not waiting for anything.

"I just have, I think everyone's life path is very different and I have so much on my plate that I'm not saying that I'm not gonna get married right now.

"But if somebody, if a certain someone did propose, I just feel that it would be a bit overwhelming right now.

“I have a lot going on and I'd like to take that step when I can fully dedicate my time to it.”

She adds with a grin, “To be honest, if I had to plan a wedding right now, I think I might just faint. It's just too much, too much!”

But when it happens, she states that wedding planning is something she will not delegate, “I'd have to do it."

To cite an example, "Right now I'm married to ANTM [Asia's Next Top Model] and Sunnies and now Tresemme, a new marriage…so very preoccupied with those things.”

Does she have any advice to career-minded women on getting married and making it all work?

Georgina is quick to excuse herself, “It's really not something you can advise, it's something where you go with what feels right for you and your flow of how you'd like your life to go.”

THE RIGHT TIME. As far as her own relationship is concerned, she says she keeps getting inspiration from it as it progresses and emphasizes it can never be boxed.

She adds, “I don't think you should ever let society dictate your relationship goals, what you think is normal.

“Each relationship has its own natural progression. For me the worst thing would be, not that this is applicable to me.

"The worst thing would be, somebody that has been together for ten years and they get married just for the sake of it, because they feel that is what should be done.

“That's not what a great marriage is.”

She notes wisely, “You get married because you feel that it's the right time, you feel that you can fully commit yourself to this person, and I guess you'll have to ask married people what else that means!

“I think also in our generation, the stigma of having to get married really early isn't there.

"You don't need to do anything and, if anything, women are so independent now it's even worrisome.

"The woman now are so independent and I really feel I'm probably in the latter category.”

She explains that she's probably not going to have kids at 39, “I like being in charge of my life and having a boyfriend that supports me and also lets me explore.”

“BE YOURSELF.” Georgina is obviously her own woman who has come a long way.

That is also her goal for the women and girls, especially those who watch Asia's Next Top Model. She wants them to acquire the right image for themselves.

George asserts, “You really have to find what makes you beautiful and not try to be like other people.

"Embrace what makes you beautiful, be it an imperfection.

"I'd always tell the girls, a lot of them said I feel so ugly, 'No, that's not, that's in your head.' I'd make them say what do they like most about themselves.

"Especially in Filipino, Asian culture, in general, it's frowned upon to feel, I do like my nose, whatever it is.

"Just feeling outwardly confident about yourself is sometimes frowned upon.

“I think for any young woman, especially in this industry, you have to be really happy and confident with who you are.

“Feel beautiful, that's the only way to feel confident about yourself.

"I think with social media too, you start looking, 'I wanna be like her and copy their makeup, their hair.' But it might not even be what suits you.”

Georgina ends with these wise words, “Just understand yourself, be comfortable with who you are and really embrace what makes you beautiful and know that.”