Pinoy slang made popular by celebrities 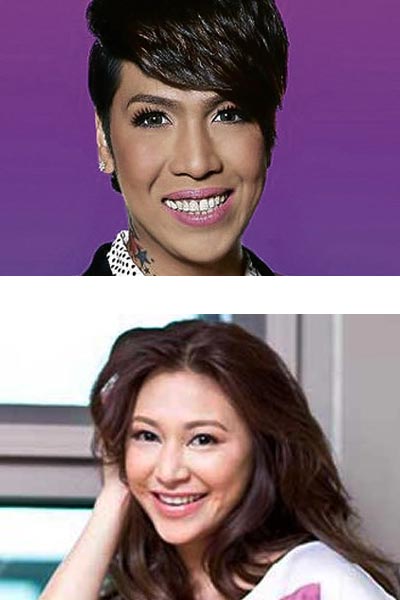 Thanks to Vice Ganda, Rufa Mae Quinto, and other celebrities, our street jargon has widened considerably.

When a feud is about to explode and you want to retreat from a potential confrontation, just smile and say, “Love, love, love!”

Take it from Kris Aquino, one of the celebrities who can take credit for inventing or popularizing some Pinoy slangs.

From ‘70s to ‘80s, the words such as Repapips, Kosa, Resbak, Ermats, Erpats, Toma, Yosi, Syota and Haybol became extremely popular. Thanks to the action stars and rock stars!

In the ‘90s, Robin Padilla made the words dehins, utol, astig so cool.

Dehins even made it to Eraserheads’ hit song “Pare Ko.”

Stars and showbiz indeed have played a role in setting the trend not just in fashion, style, and beauty, but also in speech.

Some terms may not sit well with the staunch devotees of the Filipino or Tagalog.

They’d probably raise their eyebrows, and retort, “You are murdering the language!”

PEP.ph (Philippine Entertainment Portal) lists some unusual words and catchphrases that have become part of our street lingo because the celebrities made them popular.

It was actually a quote that, over time, has penetrated our daily convos. Some don’t actually realize it's grammatically incorrect, but, heck, it has become an expression like its depends.

Showbiz fans claimed they heard it from Vilma Santos. A few Netizens said Ara Mina said it too.

There was a period in Carmina Villarroel’s life when this was her favorite expression, like she would use it as a superlative for her every adjective. She was really super-duper happy using it.

It’s supposed to be the expression when you’re surprised or shocked, accompanied by a simultaneous movement of an arm and a leg to one side.

Dolphy used “nge” in most of his movies.

But if you lived through the ‘90s, you’re more familiar with “ngee,” along with “esmyuskee,” which was made popular by Ang TV.

While giving the contestants more time to choose over pera o bayong, she and the audience would chant, “esep-esep!”

You can tell that to a friend dumbed down by an unhappy relationship, “Friend, esep-esep!”

The usage is: verb then repeat the verb then add “pag may time.”

Hence, another way of telling your friend acting dumb over an unhappy relationship, “Friend, esep-esep din pag may time!”

Ryzza Mae’s contribution to the street lingo is this two-word sentence.

After launching the look-up pose via her show, selfie fans began doing their selfies saying,”Look up!” instead of “cheese.”

This word traces its origin back to 2011, when it was used as the new superlative.

Often used satirically to note that something is exaggerated, as in “wagas kung makatawa” to describe a friend who laughs annoyingly.

All of us have our own ka-berks, yes?

Eat Bulaga! practically can have this word patented.

Ethel Booba made it a popular expression when she co-hosted Extra Challenge with Paolo Bediones.

One of the funniest satirical punch lines from Bubble Gang, popularized by Michael V as Donya Ina, a mother critical of the vanities, foolishness, and stupidities she sees in social media.

Donya Ina may be funny, but she actually makes sense.

Another expression made popular by Bubble Gang.

When a story or a punchline has an underlying meaning, it is emphasized by saying “boom,” with matching gesture of the hips thrusting forward and hands wide apart pulled with a slight sudden force.

Vice Ganda has added “panes” to “boom” and made it as one of his favorite catchphrases in Gandang Gabi, Vice!

Waley, say, when a joke falls flat and havey when it makes its mark.

As one of the Showtime jurors, Vice introduced, “May nag-text,” and he would read a comment or message that supposedly came from whoever.

'Di ba puwede was also made popular by Vice. It appeals to something that’s widely-assumed, but not necessarily true.

Agad-agad is usually Vice’s retort to any exaggerated statement or claim.

This is the latest expression popularized by Vice Ganda.

But the word wow, normally used as a compliment, is tinged with sarcasm here.

To a friend who brags about every new thing he buys, you say, “E di WOW!” Exaggerate the “wow.”

All these came from just one lady, Rufa Mae Quinto, who repeatedly uses them in all her shows.

Did we miss out on anything, PEPsters? The space below is yours...