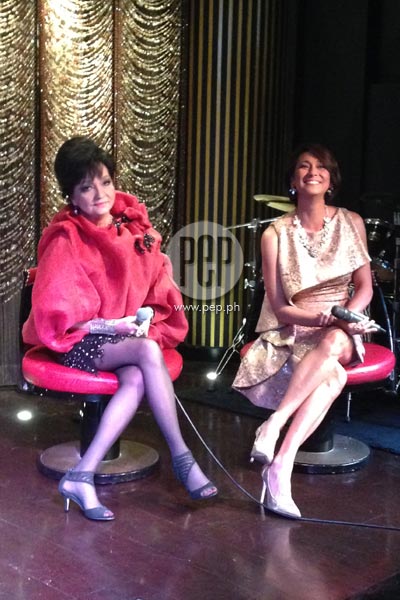 Did you know that Cherie Gil considers Celia Rodriguez her second mom? The latter confirms this: "She practically grew up with me."

"If I get mad, I don't say anything. I just lift my eyebrows. Power look,” confessed Celia Rodriguez.

Accomplished actresses Celia Rodriguez and Cherie Gil are aware of the "petrifying" effect they have on people—onscreen and off.

But Cherie was quick to point out, “We don't like to flaunt it too much. We try to be humble about it.

“As long as it's done with a smile. After that, the power look.”

Does it come naturally?

Cherie’s answer could rival that of any beauty queen.

“Frankly, I didn't even know I had it. Confidence, maybe? Although, I pretend to be sometimes.

“I think it's the belief of knowing that every person has the ability to be better each day and try to make oneself significant to each and every person...that she meets.

“And I hope that I've been able to do that in my own small way, in the roles I play, the people I meet...”

At the launch of Celia and Cherie as the new endorsers of Acer Philippines, the two women agreed to a no-holds-barred Q & A with the press, and proved there’s more to their mataray and matapang image than meets the eye. So much more, PEP.ph (Philippine Entertainment Portal) came up with a list of 10 things you didn't know about the two fine actresses:

1. Celia said she doesn’t actually want to be called kontrabida.

“I want to correct [that],” she threw in before adding that she won Best Actress award for her non-kontrabida role in Lilet, not to mention her Best Supporting Actress trophies for Kulay Dugo ang Gabi, Passionate Strangers, Blood is the Color of the Night, Bulaklak sa City Jail, and Magnifico.

2. That evening, Celia was touted as the “best Valentina,” the nemesis of Pinay superhero Darna.

Celia underlined, “I was the first to play Valentina...in color.”

4. Cherie observed that when she was still Mrs. Cherie Rogoff, she and Celia had the same initials.

Cherie clarified, “I've dropped the R, so I'm back to G.”

Cherie also revealed, “Tita Celia and I have the same birthdays, June 21.”

5. The two shared their thoughts on technology.

Cherie: “Nowadays, most dates are made from mobile phones.”

Celia: “A different kind of touch. There's no warmth.”

“But I try to keep up with my children.

“I used to play Angry Birds…But I’m not much with the games.”

She also enjoys apps like Currency Converter, CNN, Uber, and other travel apps.

“I like posting good pictures. I leave the selfies to my children. They just love doing it with the hashtag #duckface.”

7. Celia said she's grateful to Acer for helping her understand technology and the Internet.

She confessed, “I don't believe so much in technology.”

However, she finds Google useful.

“Imagine, even those prominent people in the early century—you can find those details!”

She repeatedly reminded everyone who attended the event at the Peninsula Manila’s Salon de Ning, “Use it [technology] in moderation!”

8. When asked about their pambahay, Cherie Gil quipped, “This…” referring to her Mark Bumgarner outfit.

Kidding aside, she said, “We're in a tropical country. I like sarongs, tank tops, boxer shorts in the house, and no shoes. I like walking barefoot."

9. And what about Madam Celia, who was wearing an expensive top by Fanny Serrano?

In a more serious tone, she added, “Loose T-shirt.”

10. And the secret behind Celia’s ageless beauty?

In a foreboding tone, she asked the audience, “Is it maintained?”

She replied, “Hello, are you wearing your glasses?”

In a softer tone, she said, “When you leave everything to God, everything will be okay.

“This is a life surrendered to God. I leave everything to Him.

“I know when He is with me, I have everything, including my looks. Thank you.”