Korina Sanchez on choosing Mar Roxas over career, why she doesn't have her own house, and other trivia about her life 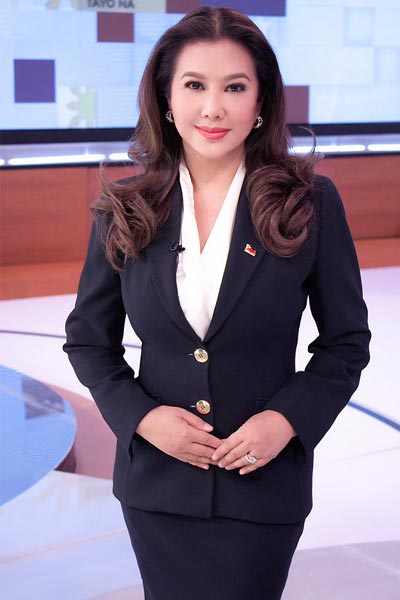 Korina Sanchez admits to not having a house of her own. When asked why, she replies, "By choice. Marami akong tinutulungan, e."

We've also heard a lot of things about her: she's intimidating, a perfectionist, and is loyal to the people she loves.

Is there anything else we do not know?

During her intimate lunch for showbiz press, we learned more about her priorities then and now plus some trivial details about her career and married life.

1. She didn't have qualms in admitting that if not for her husband Mar Roxas, she wouldn't have a house of her own.

For most of her life, she's been renting a house.

Korina admitted to sending her pamangkins to school.

2. She keeps her shoes in Orocan and Tupperware.

Laughing, she revealed that the minor problem she has is space.

What if they build a bigger house somewhere?

They don't have plans of extending the house either.

3. Korina does her own home interiors.

“I design my own furniture, minsan dun tayo mag-meeting sa isa kong bahay sa The Fort. I do my own interior decoration.

"I choose my own fabric for my curtains, mga gano'n. May local [fabric], merong galing sa abroad.”

Add to her many traits is being tenacious.

And where did she find it?

5. One thing she never imagined for herself: become a "corporate diva."

“Hindi yun ang aspiration ko. You know, in ABS-CBN, I could have become a [Vice President].

“So I never really wanted to be like a corporate diva.

"And I’m always on top of my own smaller projects. So that’s enough for me.

“I never wanted to be in meetings, in consensus. May pagka-diktador ako. e. Oo, having to listen to everybody? I’m not like that!”

She proudly shares that she can do her work alone, once given a task.

“And my bosses in ABS-CBN know that, so when they tell me ‘Korina, this is the target,’ okay leave me alone, I’ll just do my thing. And I meet my targets."

8. Korina agrees when we said her profession is "restricting" as far as her being a politician's wife is concerned.

“Well, I guess some people would like that. But ano ako, e, I’m a woman of many passions.

“So to be just that [a journalist] my whole life, that’s not me. Kaya ako, kahit saan mo ko ilagay, [kaya ko]."

But of course, she really loves her job.

“But you know, as my real profession, I take it seriously. But I don’t want to take myself that seriously.

“And, siyempre, a lot of my meaningful work, I was castrated because of my association, but I’m still able to perform naman e as a journalist in other place.”

9. She has no plans of putting up her own network.

10. She cooks for Mar only once a year—on Valentine's Day.

Why? Isn't she a good cook?

Margraita is the lady chef behind restaurants Cibo, Lusso, and Grace Park, while Malou owns Mamou, Mamou Too, and Recover Food.

11. Rated K is her brainchild, and after 10 years, she's not considering any overhaul.

“You know, I think the reason... teleserye nga has a life span of six months, e.

Korina believes they owe its success to the stories that showcase the Filipino society.

“And I think, it’s because it’s a mirror, e. It’s a mirror of Filipino. And you can put anything in it.

“I designed it talaga that way. Para I’m not boxed in, by a format. I can put a contest there, pwede ako magpacontest diyan."

12. Korina is willing to give up her career for Mar.

“I’m happy being with Mar. I can’t imagine naman my life being without him.:

So, she says about her being a broadcast journalist, "...I think I was just having it too good for too long, 'di ba, that I was both a journalist and his wife?

“But you know, when the stakes are higher, the investment is higher. I have to give up journalism for him, if he seeks for higher office.

“So okay naman, kasi, parang I can see there is transition.

"It all depends on Mar’s plans. But I’m ready, whatever those plans are, I’m ready.