John Spainhour, Benjamin Alves, and other hunks reveal how they scored six-pack abs 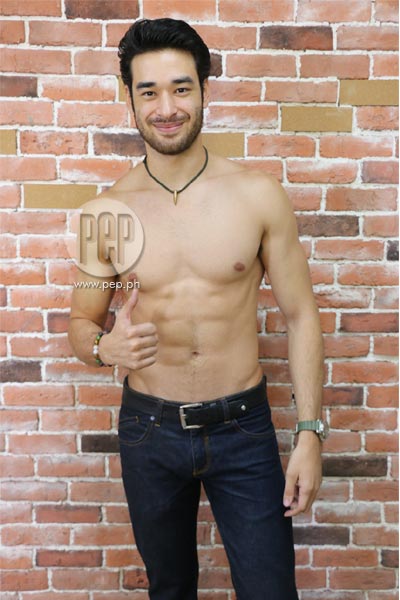 John Spainhour reveals his gym workout routine: "Mostly free weights. [I] just go to the gym, run on the treadmill for 30 minutes or ten minutes, then move into free weights."

Abs are not achieved overnight.

To some, it will take years of discipline and workout before they become visible.

ENZO PINEDA, for instance, got into triathlon.

After 5km of crawling on mud, climbing up 10ft greasy walls, carrying weights, throwing javelins, and jumping through fire we did it! Hella awesome finishing the Guerrilla Race 2015 with my best buddy Rocco. Thanks bro for the push and the invite. Blood, sweat, and no tears baby!!! Lol

However, he explained that he doesn't just want to be fit this summer.

Hence, he's focusing more on having those muscles.

"I work out twice a day. It's more on muscle building kasi you need to burn fat.

BENJAMIN ALVES is into watersports.

He is presently hooked on jet surfing, which he got to try in Dakak last month.

"I'll do everything, I'm always like, try everything once. I try to jet surf, that's new.

"I felt like a super surfer cause the surfboard has a motor in it so para kang Poseidon kasi nakatayo ka dun sa surfboard, and once you get your balance...

He also shared that his workout regimen includes running and mountain biking.

"I try to run now, I try to diet. I bike as well, whatever comes. I'm trying to get into mountain biking."

JOHN SPAINHOUR is now at a stage where he just maintains his physique.

"Just try to keep consistent at a workout regimen, like go to the gym, that's what I usually do.

"I don't really change what I do for summer or winter, usually my workout's continuous."

"Mostly free weights. [I] just go to the gym, run on the treadmill for 30 minutes or ten minutes, then move into free weights.

But wait, this former U.S. marine sniper admitted to having his lazy days.

"Yes of course, there have been a lot of times especially when lately when I've been busy with work.

"When you get home on your free time, it's like, I just wanna relax and chill and not go to the gym."

"I benefit more on eating lots of food. I just try to eat enough to sustain my energy and my weight."

Are you SummerReady? Time to pump up those muscles and get a lean strong abs! Take EuphoriaMaxx! a premium Supplement that is Engineered to Build Muscles, Boost Energy, Burn Fat and Increase Endurance! Get it at all Watsons Philippines

JERIC GONZALES, the grand winner of Protégé who started in showbiz doing teen roles, is now all grown up.

Thank you @edz_arden for the photos and sa lahat ng nagpunta kagabi thank you!! Nagenjoy ako sobra!! See you again next year! #Cosmo69

But just like John, he's just maintaining his weight.

But when he has projects, like Pari 'Koy, he gets into dieting, and runs regularly.

It helps that he has gym buddies: brothers Aljur and Vin Abrenica!

Aside from that, he also posted on his Instagram that he enjoys biking.

And he used to train for Martial Arts.

As for his diet, his secret to maintaining his weight: kamote!

With his dedication, he might just be really the next Richard Gomez.

JAK ROBERTO, 21, does the basic workout—running, jogging— which is just right for his age.

ONE GAME ONE LOVE

How about you, PEPsters? Do you or your boyfriends and kuyas have any regimen that's guaranteed to make abs appear?