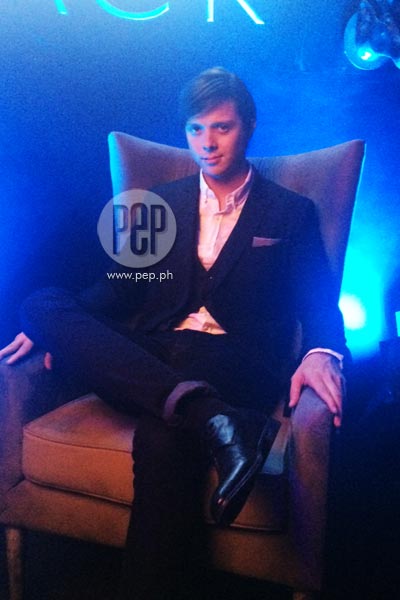 Frank Magalona's musings on fashion and style: “You see different colors in life, and those colors are like, I wanna portray these colors in arts, music and science..."

Frank Magalona has stepped out of the shadows of his more famous siblings, Maxene, Saab, and Elmo, just to name a few.

He is one of the new ambassadors of AXE Black, along with Fabio Ide and Victor Basa.

Frank explains how he became an endorser for the brand: “I just got invited one day, you know.

“They handpicked me and I was surprised. I went to the meeting and I didn't know it was gonna be something like this, something this big.

Frank describes his new role as “a guy who doesn't wanna overdo things, you perceive this guy as shy, reserved and timid, but there is more to him than meets the eye.”

DEFINING HIS STYLE. We ask how he relates to the concept.

“I can identify with the brand because it has a light scent, but it grows on the person wearing it. Same with me, it's an analogy," he tells PEP.ph (Philippine Entertainment Portal).

His musings on style and fashion? Frank waxes poetic.

“You see different colors in life, and those colors are like, I wanna portray these colors in arts, music and science..."

His other pursuits? Frank likes to experiment.

During the launch, Frank revealed his budding art persona as he included one of his pieces in his Pop-Up Black Bar concept called Mind Fact.

BLACK POP-UP BARS. AXE Black has invited the public to the world of understatement through a series of Black Pop-Up Bars, which will be operational from June to August, and will be hosted by the three men who represent the Black mantra of “Less Effort, More Style."

They are Victor Basa, Fabio Ide, and Frank Magalona. The three ambassadors have the freedom to bring their own concepts to life, while staying true to the understated world of AXE Black.

Bamboo and Solenn Heussaff, along with the brand team, will determine the winner of the Black Pop-Up Bar series based on the concept, crowd impression, and votes.

During the launch at Shooting Gallery Studios, the venue was transformed into a live gallery, where the three ambassadors gave sneak peeks of their bar concepts, along with their respective teams: Fabio Ide with Sam YG, Frank Magalona with Tony Toni, and Victor Basa with Slick Rick.

Frank describes his Pop-Up Bar as “not a beginning or end, but everything in between.”

Frank's drink of choice—which people will get to experience in his Pop-Up Bar from June to August—is Color Proof.

Raymond Gutierrez, who partnered with Frank in his Pop-Up Bar describes their work as “simple, sleek, sophisticated, but done well, perfectly. It's a museum of sorts that combines science, art and music.”

MUSIC AND TELESERYE. Frank says he is also working on his music.

“I'll be releasing an album, it's in the works, I really want to release something next year and I'm excited for that. In case it happens and pushes through, I'd be more than happy to share it with you guys.”

Frank appears regularly on the GMA-7 primetime teleserye, Once Upon A Kiss.

"Hopefully, I'll have more projects with GMA and for now, all I can say is I feel blessed na I have this and I thank the Lord for everything He has given me."

How has he kept her under wraps?

Frank, ever the reserved guy, confesses, “I try to keep myself away from the limelight. I don't really...well, because I’ve been exposed to it all my life.

“I think I have enough power to be able to tell myself to, you know, give more time to things that mean something to me.”

What attracted him to this special girl?

"I got attracted to her because, I think I just found her really attractive, you know," he says.

“And when I found out what she does, like how she is as a person, I just found out that her being attractive is a bonus, you know.

“It's a bonus and I think she got attracted to me because of what I can offer.

“She knows the real me, and I instantly showed her the real me. That's how much I liked her the first time I saw her, I revealed all the colors.”