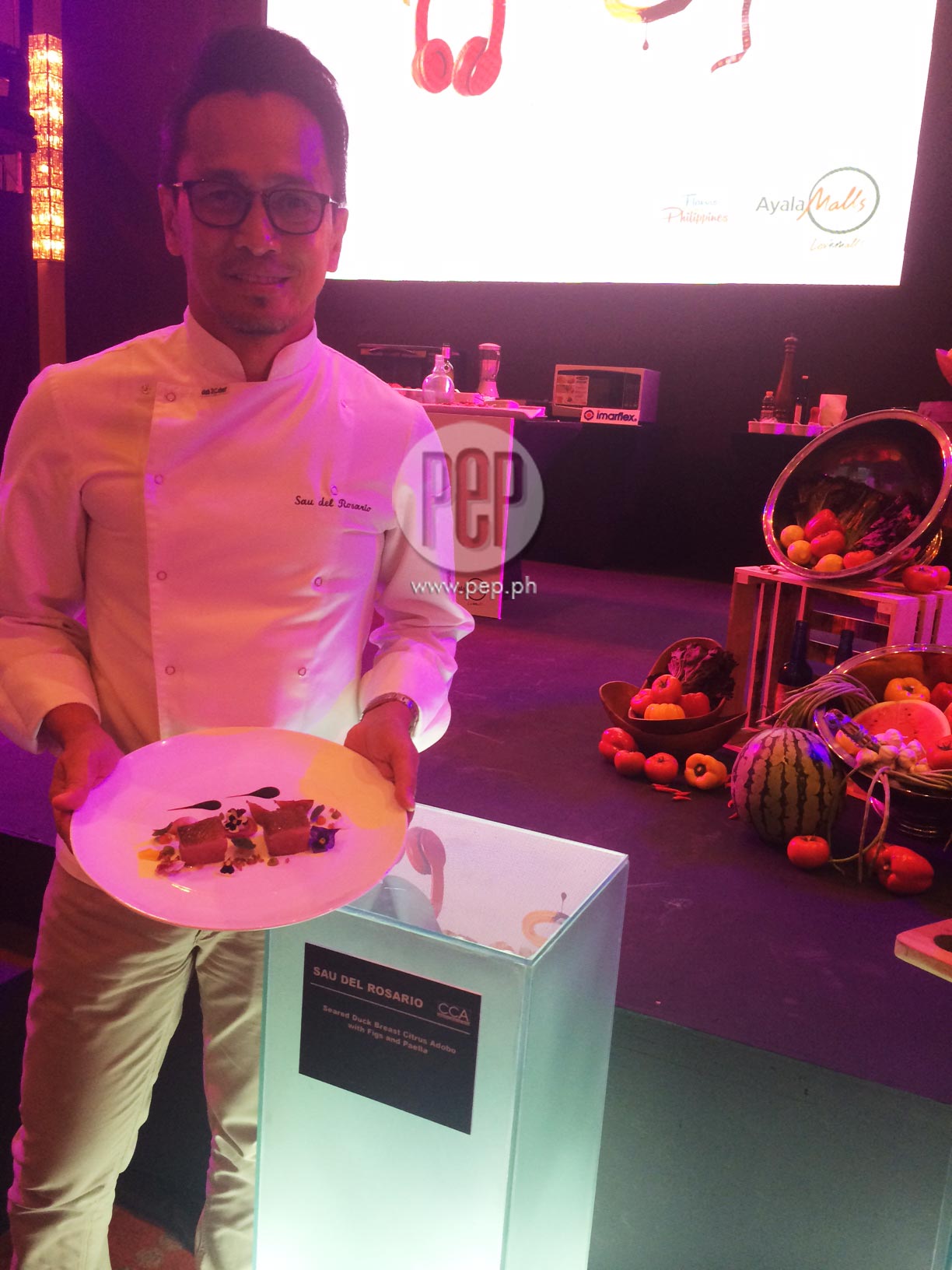 Chef Sau del Rosario, the Culinary Director for the Center for Culinary Arts (CCA), is busy with the first ever Madrid Fusion Manila.

Chef Sau is excited to have all 20 CCA-affiliated restaurants present their take on Spanish food, Filipino-style.

He says one of their restaurants, Casa Roces, is definitely the go-to place for delicious Filipino-Spanish food.

He adds that Cravings will also have its own Spanish-inspired menu.

For the kick-off of Madrid Fusion Manila, Chef Sau presented his own adobo duck dish.

"Kasi I live in Pampanga and I wanna take this with me because we've been colonized by the Spaniards for more than a hundred years.

"In Pampanga, where I live and where I grew up, we use duck in adobo.

"I incorporated paella as well, and we put a little coconut cream.

"My take is a more modern approach because that's what Madrid Fusion is all about, 'di ba?

"More on the food, the technique and application."

The celebrity chef is excited about Madrid Fusion Manila, because "this is another milestone in Philippine cuisine.

"As a food ambassador, I've been promoting Filipino cuisine with the DOT all over the world. This is a good sign that we're really making it into the world market.

"We're looking forward to more innovative cuisines from Filipino chefs. I believe culture is best served on a plate!"

He names his all-time favorites on the Spanish side of the Filipino plate.

“As Kapampangan, we're very good with sarsa. My mom has this favorite embutido recipe. There’s also paella Valenciana or arroz Valenciana but in Pampanga, we call it bringhe."

He says while the Spanish use corn, Pinoys have been using "rice on bananas leaves, see how ingenious, how galing the Pinoy?

"They can always adapt to anything."

He adds, "If you're looking for great Spanish culinary roots, I think Pampanga is the best place to go."

Chef Sau believes that Pampanga is the culinary capital of the Philippines.

He declares, "Thanks to the Spaniards! Because my grandmother is Spaniard and that's the way they cook—with passion…

"They are very good with sauces, and it's not so complicated. I like also their traditional way of preparing food.

“They like to do it from scratch. My grandmother, I recall, whenever she boils something, she uses charcoal, and she does it overnight.

"Now there is a lot of technology but I think it's time to go back [to the traditional way of cooking]."

He says Madrid Fusion Manila is interesting because "it's innovative but classical. It does not clash at all, it’s all about compromising and complimenting.

"Let's go back to the basics, but make it more appealing and practical in the modern world."

This is Chef Sau's 20th year as a chef. He has come out with 20, a commemorative book, which features his favorite dishes like embutido and kaldereta.

He tells us, "It's about the journey from when I was cooking as a kid to when mom gave me all these recipes to when I moved to Paris, then Spain... these recipes are my collection of love and passion and this is my gift to everyone."

MERCATO IN AYALA MALLS. RJ Ledesma, host-author-entrepreneur, is also one big reason Mercato Centrale continues to grow and morph into its many versions. For Madrid Fusion Manila, Mercato Centrale has come up with Mercado.

RJ explains: "We've curated this portion where we've gotten some of the Spanish chefs, the homemakers, Spanish-inspired entrepreneurs, and we’re going to different Ayala Malls.

"We also have Spanish expats, Filipinos with Spanish roots…people with a legacy of Spanish cuisine.”

RJ adds, "It's curated by Mercato so we have a good selection of vendors. People don't always have a chance to go all the way to Mercato, so now we're bringing it to them."

His favorite Spanish dish? He laughs as he tries to recall its name: "I really like that cold soup—made of pureed tomato—and I have it whenever I go to Spain...What's it called again?"

We Google: It’s either gazpacho or salmorejo.

He continues, "I'm still pescatarian now so I love the octopus dishes. And a glass of Spanish wine to wash it all down," he says.

Madrid Fusion kicks off on April 24, and will run until sunday, April 26.