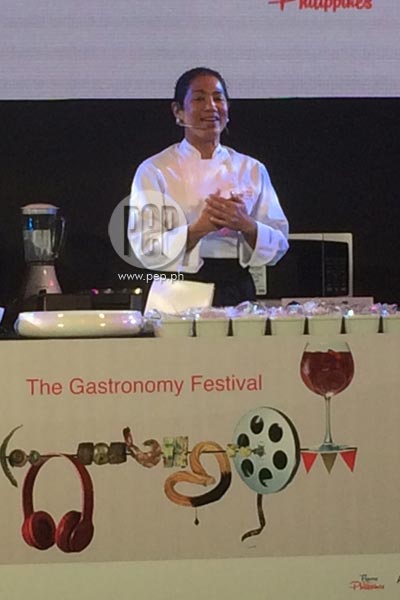 Chef Margarita on her kinilaw: "I did research as to how they do kinilaw in Negros, and the duldol salt was just my take on it."

Madrid Fusion, an internationally renown gastronomic event, has made its way to Philippine shores.

It all started when Chef Margarita Fores and Chef Myrna Segusmindo presented at the Madrid Fusion themselves.

Chef Margarita recalls, "Chef Myrna and I, we've been humbled and honored to have been the first ones to raise the Filipino flag in Madrid.

"Actually, we were invited to present at Madrid Fusion because precisely there was already an arrangement between our Deparment of Tourism [DOT] and Madrid Fusion."

This festival is an annual showcase of progressive haute cuisine in Spain held in Madrid for the past 12 years.

Chef Margarita says the Philippine participation is very significant and historically relevant, "I must say because we've been attendees at the Congress.

"And for many years in the past, we were the ones who kinda lobbied with the Department of Tourism to see if there was a possibility to kind of get Filipino cuisine presented.

"Because they do a feature every year on a certain cuisine that is like the next big thing.

"I was always sort of the opinion that it was high time the Philippines got on that stage, and it was always just a dream for us Filipinos who would attend the Congress."

She says that through the DOT's Flavors of the Philippines initiative, it wasn't hard to get them on board with Madrid Fusion.

"It was a great idea to present it to Secretary [Ramon] Jimenez because he is an out-of-the-box thinker and the minute we told him about, 'Would you want the Philippines featured?'

"He said it would be nice to get the Philippines featured at Madrid Fusion but maybe we can invite them to do an Asia edition since everybody is looking to Asia for inspiration.

"To make a long story, Madrid Fusion was sold on the idea because they realized we have this story with them, a story that's irreplaceable, you can't buy it.

"It's an existing reality.

"Right away, they realized it was a good way to penetrate the Asian market. The rest is history."

KINILAW IN THE SPOTLIGHT. For the kick-off held in Fairmont Hotel Makati, Chef Margarita Fores cooked on-stage the kinilaw that had everyone in Madrid Fusion turning their eyes to the Philippines.

She explained that more than adobo, the Madrid Fusion team chose kinilaw, "They realized that over adobo, the kinilaw was more unique and also kind of insinuates an originality that may have been from many, many years ago, over the ceviche event! That was their thought."

She revealed what the Spanish delegation thought about the kinilaw, "They felt the kinilaw was more uniquely representative of what Filipino cuisine was all about."

In order to craft her own kinilaw version, Chef Margarita explains, "I did research as to how they do kinilaw in Negros, and the duldol salt was just my take on it.

"But everything like the red egg and black bean was endemic to Negros."

Chef Margarita hails from the island of Negros.

For her, the kinilaw would best suit her restaurant named Grace Park, "and for Alta which is my newest restaurant in Ascott in BGC [Bonifacio Global City] but we're doing other, kind of Spanish-inspired dishes at Cibo as well and at Lusso.

"So all four of my outlets will be featuring Spanish and Filipino things that will honor Madrid Fusion.

"For example, we're doing an amatriciana in Cibo with jamon serrano, and we're also doing our spinach dip but this time with a Spanish version of gorgonzola which is cabrales.

"And of course at Lusso, we're doing our croque monsieur toast buto with jamon iberico and manchego instead of the usual fontina and prosciutto but with Spanish ingredients."

All this kinilaw talk, does it make her feel inspired to come up with her own kinilaw festival?

The Philippines has festivals for nearly everything! Why not kinilaw?

She answers, "A kinilaw festival? Maybe soon, at Grace Park or when I do my catering events, that would be nice."

Merienda will be offered in Food Choices in Ayala Malls across the month of April.

Pelikula: The Spanish Foodie Film Festival, a joint effort of Ayala Malls and the Embassy of Spain, is set on April 22-26 with tickets priced at P100 per screening in Greenbelt 3.

Mercato Centrale is of course part of the mix as this mini-marketplace entitled Mercado, featuring Spanish-Filipino gourmet fare, will go around Ayala Malls the whole month of April.