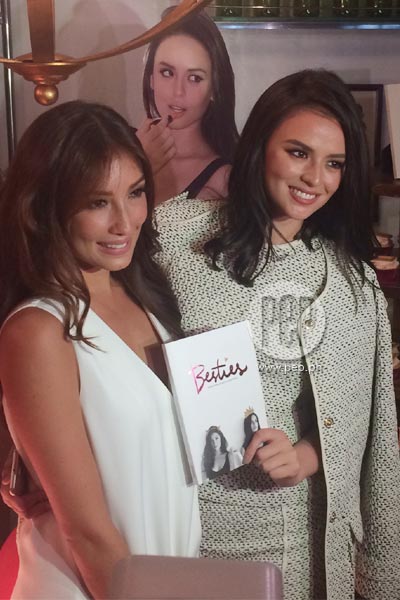 "Why are you showing your butt on your cover, bagay ka ma-rape."

Can you imagine reading this? How would you feel?

Well, Solenn Heussaff read these mean tweets and comments and responded in the best way possible.

She did it via a book called Besties, which was launched to the press in Las Flores, Bonifacio Global City.

Georgina Wilson, Solenn's co-author for Besties, chimed in when the second statement was read, "I think other people call that freckles."

Solenn resolved to remind herself, "I love being me."

HOW IT CAME ABOUT. Publisher Ernie Lopez was also ecstatic the book finally came out.

He remarked, "A lot of people have preconceptions about Solenn and Georgina, myself included. Ang dami talaga.

Solenn explained why the project ended up as hers and Georgina's as their barkada is composed of Anne Curtis, Liz Uy, Belle Daza, Raymond Gutierrez, to name a few.

Solenn said, "In the whole barkada, we're all friends but George and I are the closest in terms of, I think, personality wise or like we've been friends for seven years now.

"And a lot of people also liked our tandem so I said let's try and work on something together.

"And we decided since we get also a lot of bashers, a lot of hate tweets, and we can relate."

She clarifies that the book is not just about her and Georgina,

"Besties is opening up to other women and making, telling the girls basically that we just want people to just be happy with themselves.

"We want people to read this and really bounce off the love that we have for each other, that we just share."

Solenn stated that the project is their baby.

"It was conceived after nine months of hard work, actually about a year...

"We were having coffee one morning and we were complaining about some things we had read on Twitter and on Instagram, and then, I said with the questions being asked to us, I said we should probably reply to them.

Georgina threw in, "An abnormal child of 12 months of labor!"

LEARNINGS. One thing Solenn learned about her bestie is George never had a baduy moment.

She related, "The one thing I learned about Georgina in this book actually is where we have a chapter on fashion, fashion style, fashion evolution, how we've been through all different styles.

"George [Georgina's nickname] has no like, no bad fashion.

"I have been through a lot of phases: goth phase, skater phase, wala-lang phase.

"George, when I browsed through her Facebook, I didn't believe when she said, 'Sos [Solenn's nickname], I don't have photos.'

"I said, 'You can't be someone who dresses that well all the time.' So I was going through her Facebook, looking for photos, and ayun, wala talaga. Totoo."

She also joked, "If you wanna test your friendship, write a book!"

This is because Solenn realized something about herself as well as she was working on the project, "...I'm still a time Nazi."

Solenn is notorious for being on time and ahead of time, something the others around her are well aware of.

Solenn admitted to Georgina during the launch how much of a time Nazi she had become, "I had a private chat room with them [book editors], where I told them we hate George because she is so late!"

She also admitted to feeling a bit bad when she realized that "George never has a bad photo, no bad OOTD day from the day she was born...

"I had to like stalk her on FB to look for bad photos because I can't be the only one with bad phases of my life."

"There is a fight between the modern woman and the Mara Clara woman and how one must be a certain way.

"You should respect them because it's their life not yours plus a whole chapter on safety during sex, so many things..."

Sex is sometimes so taboo, Solenn said, so she felt it would be good to talk about it in the book.

How about George's favorite chapter?

"George and I are very different in certain matters, like me, finance is not my thing. Pero I learned from [her] yung mga tips and, siyempre naman, maraming chapters talaga sa book na 'eto."

Solenn's takeaway for the book would be for their fans and readers "to feel good about yourself when you feel about who you are, being okay with what you have, being okay with what happens in your life, and just learning from it instead of hating on everything and being disrespectful towards one another because of an incident that happened.

"It's really loving yourself and being able to love other people more."