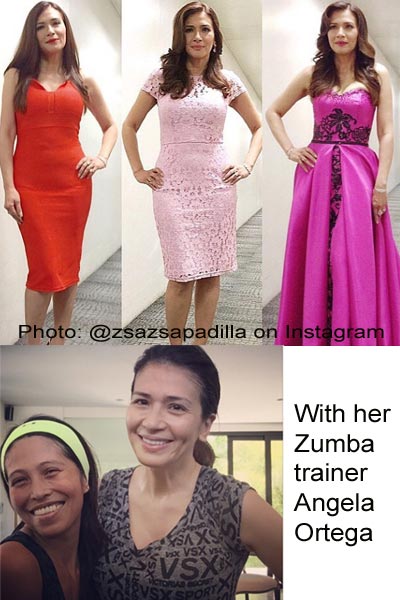 With a divine voice, a lovely face and a sexy body, who would not love Zsa Zsa Padilla?

Slim and fit, the Divine Diva turned 52 last week without showing any sign of aging.

Zsa Zsa shared with PEP.ph (Philippine Entertainment Portal) how she does it, beginning with going back to a vegan diet until she met her partner of one year, Conrad Onglao.

She was in the throes of depression at the time and as she told it, “Before I met Conrad last year, I really changed my diet.

“I said enough na, enough of this depression.

“I gained so much weight that time so I said I’m gonna change my lifestyle.

Then she met Conrad, and it made Zsa Zsa wonder, where would they go for a date?

WORKOUT. Having failed in her attempts at dieting, Zsa Zsa started focusing on physical exercises.

“I’m lucky that I grew up in a home with a gym,” she recalled her childhood.

Her father is Carlos Padilla Jr., a former actor who became known as a boxing referee.

“My father works out a lot until now, he’s already 81 years old, he works out.

“My brothers and sisters do the same thing. I love to work out, I do

“It’s not something na napipilitan akong gawin, I just vary it.”

She shared that aside from the regular gym workouts, she also does Zumba and Pilates.

“So I go to the gym three times a week, Monday, Wednesday, Friday

“And then Tuesday, Thursday, I do Pilates and Zumba.

“And then there’s this one time I was bored with Zumba, I just do Pilates. You just up the hours.

SCOLIOTIC. Zsa-Zsa also mentioned her scoliosis, which pushes her to do more Pilates.

“I really need the Pilates because of my scoliosis, it’s to correct it.

“Even if I have metal rods, I still have posture problems.

Zsa-Zsa is slated to do concert titled Beginnings on July 31, at the Newport Performing Arts Theater of Resorts World Manila.