Iya Villania-Arellano plans to be an Iron Mom someday 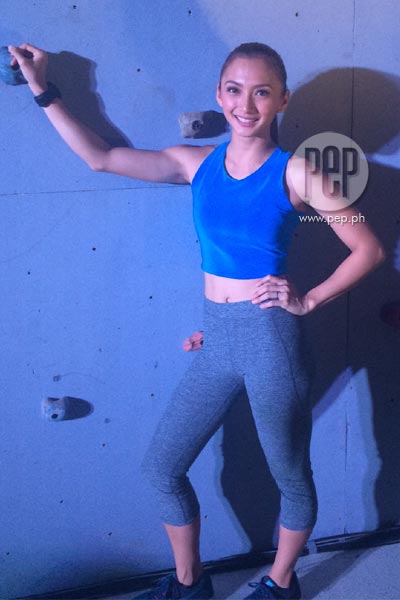 Now, she wants to be a super athtlete.

At the Claritin RediTabs launch where she was introduced as the new brand ambassador, Iya was affectionately called "Mrs. A."

PEP.ph (Philippine Entertainment Portal) asked her for a quick update about her married life, and she quickly answered, "Sobrang saya!

BABY PLANS. Since she's been married for over a year, people continue to ask when Drew and Iya will become parents.

She said, "We do have plans, lalo na kasi Drew and I love kids.

"Kung puwede nga lang now, but we're kinda enjoying this stage pa kasi. It's still so new to Drew and I.

"Ang saya to have this time together, e. We're enjoying this before we have kids."

Iya confessed though that there have been some changes to her original plan to have five kids.

She revealed, "Naging three na lang. But Drew says, of course there is a possibility na baka mag-decrease pa 'yan after having one, kasi I'm sure it's gonna be a challenge!"

But Drew is supposedly a very supportive and encouraging husband?

Iya remarked, "He's a clown. He is a guy, so makalat, but he's very malambing!"

NO SURPRISE. As the pair dated for close to a decade before getting married, Iya said making adjustments to Drew's quirks, his messiness included, has been no problem at all.

"He's never really had yung kasambahay, so two years before we got married was two years of him just living alone.

"And, of course, I would visit him and I would already get to see how he would be as someone na ka-live in, although we weren't living together then," she related.

She described what she observed then and which helped prepare her for the time when they would eventually start their own nest.

Iya added, "I could kinda see how it would be then to live with him, and we're married now, so nothing naman nakakagulat, nothing that would make me want to divorce!"

TRIATHLETES. The one good thing that Drew has brought out in Iya is her passion for triathlon.

She may not look it, but Iya works hard to maintain her lean and mean physique. Her well-toned arms and abs are the results of an intensive weight and strength training.

Her efforts clearly paid off when she placed first at her very first Ironman 70.3, the Tri United 4 in Pampanga, on top of earning a finish at her first international Ironman 70.3 in Vietnam.

Although she worked out regularly before getting married, Iya admitted she was not keen on joining triathlons.

"I don't how I got into the sport, I used to think it was impossible for me to do.

“But, of course, being married to a triathlete, it was inevitable,” she said, adding she truly has become more active especially as her home neighborhood is conducive to a sporty lifestyle.

"Where we live, it's just so easy to stay active. The whole triathlon is new to me, and so that's something I've been able to do more of with Drew," she proudly shared.

Iya said the triathlon in Vietnam was her biggest race to date, despite her initial jitters.

She recalled, "With 1,000-plus participants from all over the world, it was kind of nerve-wracking because I wasn't sure how I would fare.

"Ang sarap lang ng feeling na I was able to accomplish something na once upon a time, akala ko talaga imposible.

Having ticked off that item from her bucket list, Iya seems like the ideal role model for anyone dreaming of taking up such a seemingly gargantuan physical challenge.

Shrugging off the accolade, she went wacky and said, "Di rin, chos! It's not impossible for anyone."

Now that she's at her prime, Iya is hellbent on pushing her limits as a triathlete.

She beamed, "Puwede pa akong bumilis, so that's what I'm hoping to do.

She'll be competing in her second Tri United this July although she admits she's still training herself to be super ready for it.

ATHLETIC INSPIRATION. Aside from Drew as her inspiration, Iya also looks up to Ani de Leon-Brown, the Filipina Ironwoman.

She remarked excitedly, "Ang astig lang kasi niya, she excels in the sport, yet even while or during a race, she also shows her dedication as a mom.

Does Iya see herself doing that, when she becomes a mom herself?