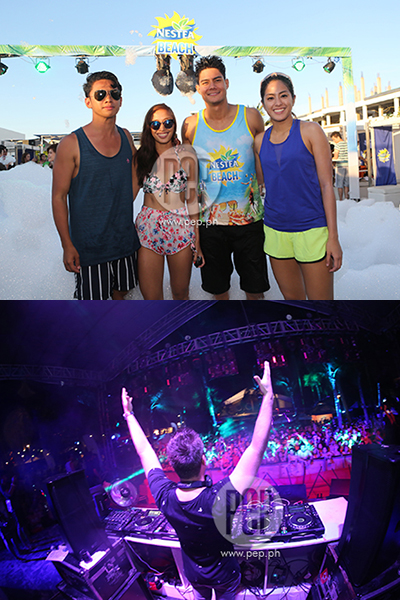 For 18 years, NESTEA delivers the most exciting activities and events in celebration of Labor Day weekend at Boracay Island, also popularly known as “LaBoracay” weekend, through #MyNesteaBeach.

Surely, it was a memorable vacation for those who created their own summer experience with NESTEA and participated in their events and island parties from April 30 to May 3, 2015.

Here’s a roundup of what happened at #MyNesteaBeach during the LaBoracay 2015:

APRIL 30. The first day of the #MyNesteaBeach witnessed the opening ceremonies of the Beach Volleyball Champions League. Twenty beach volleyball teams from different universities around the country battled it out on the sands to win the grand prize of P100,000.

Free drinks were given to the beach-goers to taste the iced tea brand’s new variant—the Nestea Cosmopolitan. Charging stations, massage, and paraw sailing were available at the NESTEA Refresh Lounges in Beach Comber Resort at Station 1 and Le Soleil de Boracay Hotel at Station 2.

The event’s brand ambassadors Daniel Matsunaga, Gretchen Ho, David Guison, and Lissa Kahayon were all there to party. Other celebrities spotted at the event include Eat Bulaga host Allan K and Kapuso star Dion Ignacio.

MAY 1. The NESTEA Beach Volleyball Champions League took a short break on Labor Day for the Fantasy Volleyball Match.

The Light Blue team composed of Gretchen, Cha, Rachel Ann, and Michelle won the first game against the Dark Blue team of Dindin, Tricia, Mela, and Amy Ahomiro with scores 21-18, 14-21, and 15-12.

After the games, invited guests went to a secret party hosted by Black Market Makati held at Kasbah Restaurant at Station 1, Boracay in celebration of Labor Day.

MAY 2 AND 3. The Labor Day weekend of #MyNesteaBeach is filled with different activities. Beach-goers went partying all night as international DJs Sander Van Doorn and Knife Party brought chaos to the dance floor at the EPIC beachfront in Station 2.

Before the parties, NESTEA organized a beach clean-up event on Saturday in-line with its long-running advocacy called Love The Beach campaign.

Blogger David Guison and other volunteers were deployed to all three stations of Boracay to pick up trash to preserve the local beaches.

“They have lots of cool events and they bring the best DJs but at the same time they know how to party responsibly.”

NESTEA’s Consumer Marketing Manager Leanne Jacinto was grateful for everyone who “shared the love, spread their love, and showed their love” for the beach.

Leanne told the volunteers, “Alam niyo naman, this is one of the most beautiful beaches in the world.

“So it’s really our opportunity to take part in this great advocacy of Nestea.”

A part of the sales of NESTEA Pitchers sold at the Refresh Lounges will also be donated to the Boracay Foundation.

Leanne said, “If you buy a pitcher, we give P5 to the Boracay Foundation and then, Nestle even doubles that.”

Meanwhile, the Light Blue team led by Gretchen dominated the “Court Crushers” game in the afternoon against the Dark Blue team led by Dindin at the second game of Fantasy Volleyball Match at the Boracay Beach Chalets.

The finals of the Men’s and Women’s Division of the Beach Volleyball Champions League also took place after the Fantasy Volleyball Match.

For the men’s division, Edward Ybanez and Edmar Bonono of University of Southern Philippines Foundation retained their title beating Johnvic de Guzman and Marjun Alingasa of College of St. Benilde in straight sets of 21-19 and 21-19.