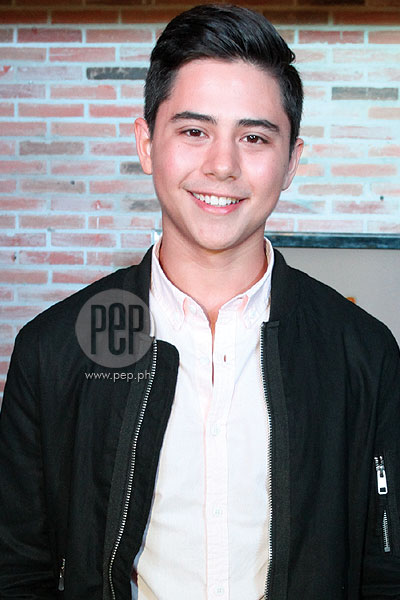 Joshua Ouano will be juggling school and showbiz. He says, “As of now, school is still my priority since I have two more years left pa."

Filipino-German Joshua Ouano, 18, is more than just a pretty boy.

If there is anything that this cutie does not want to be known for in his showbiz venture, it’s to be one of those eye-candies with nothing much to offer to the fans.

Recently, he was featured in TV5’s WATTPAD Presents Secretly in a Relationship with a Gangster, which also starred Chanel Morales and Mark Roque.

The said weeklong TV series is the TV debut of Joshua, who auditioned for the part a few months back.

FROM CUTIE TO ACTOR. Joshua’s biggest break came last year when he was chosen to be one of the 30 Candy Cuties of Candy Magazine.

In a recent interview, PEP.ph (Philippine Entertainment Portal) asked him how it feels to have a lot of girls swooning over him.

“It feels humbling, it feels good and, at the same time, it feels amazing,” was his answer.

“I feel humbled about it. God created everybody beautiful. It’s a blessing that people appreciate.”

Judging from his gentle manner of speaking to the press at the WATTPAD Presents press conference held just recently, Joshua has yet to improve his confidence if he wants to be noticed in the industry.

But, he said, that’s actually his very reason for joining showbiz.

“I wanted to prove people wrong that I’m just not a shy guy, and I want to prove to people that I can really do this thing.

“I know it’s difficult but I’m learning, slowly getting there,” he remarked.

SHY GUY. Joshua recalled going to the audition for a role in WATTPAD Presents a few months back, and was delighted when he got a call-back.

“I was given this opportunity sa acting. I tried my best. I joined mga workshop sa mga acting.”

The aspiring actor knows that he still has a long way to go.

“I try to improve because yun talaga ang kulang ko.

“I wanted to get into it because I think it will really help me to become a more confident person, parang more full person.

“That was my goal in doing this.”

Hence, this June, Joshua will be attending more acting workshops—one of which will b e conducted by Laurice Guillen plus another workshop in PETA (Philippine Educational Theater Association).

“It’s really to build myself talaga,” he stated.

This Cebuano lad is also an incoming third year Marketing student at the University of San Carlos in Cebu.

While he said that he intends to juggle school and showbiz, school remains his priority.

“As of now, school is still my priority since I have two more years left pa [in college].

“Right now, I’m still going to school, but, at the same time, still do projects, do whatever I can.

“Maybe after I’m done with college, I can really go full force in this.”

IDEAL GIRL. When he's not taping or studying, Joshua is into sports, such as basketball and football.

He also revealed that he used to take debate classes.

Asked what he finds cute in a girl, he said “smart and intelligent.”

Joshua, who is currently single, said that he likes “someone mature, someone responsible, someone who can take of herself.