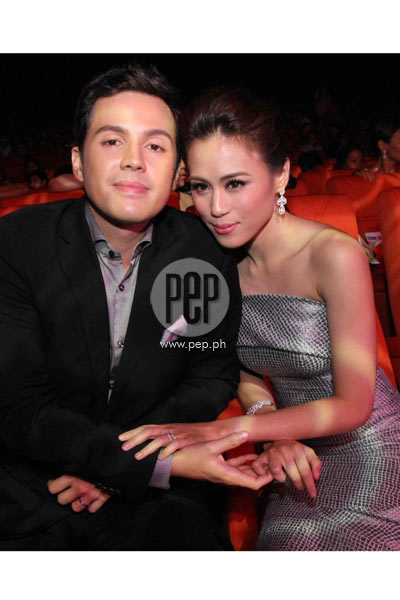 Here's why Paul Soriano cried upon seeing his bride Toni Gonzaga. He said, "I was the happiest guy in the world that moment, also right now, and for the rest of my life."

Sinabi ni Toni sa kanyang acceptance speech: “I think just like what I said in the movie, in my last line when I met Engr. Martin, I said, ‘Your timing Is just perfect!’

“Really, I claim this. His timing is just so perfect because this award couldn’t come in a better time now that I have a different status in my life and entered a new chapter in my life.

"He blessed me with the greatest gift and the greatest reward, and that is to go home to my lifetime partner who's here with me right now.

"After eight years, finally we can go home together, we can do whatever what we want.

"Such a great feeling, such a blessing, and we’re excited for the next chapter in our lives.”

Aniya, “It was overwhelming because she was so beautiful.

"Once that door opened, I was so emotional because she was so beautiful that time.

"All of my emotions of happiness, joy, blessings, it just all came out na.

"I was the happiest guy in the world that moment, also right now, and for the rest of my life.

"That the girl of my dreams is gonna spend the rest of my life with me.”

Ang kuwento ng mister ni Toni, “We plan to do something this week.

"We're gonna check out the beauty of Philippines.

"We wanna travel around the country first, before we go all over the world.

"We’ll spend a couple of days here in the Philippines, kasi she has PBB [Pinoy Big Brother] on Saturday, June 20, so she has to go to work.

"Maybe before the end of the year or next year we can do a longer vacation of the country.”

"We plan to spend a couple of days there, just relax, sleep, you know, and do nothing.

"Just be in love for that day and then, I guess, it’s gonna be back to work.

"But the best part is we’re gonna be with each other for the rest of our lives.

"That’s very exciting for me.”

“Definitely! We will have children but in God’s time.

"Right now, we just want to enjoy each other and everything about each other right now.

"In God’s time, when it’s time to have children, then we will do that.

"Kung ilang babies we want? For me, maybe two or three babies are okay or twins. Basta may one girl and one boy. ”

How was the first night na magkasama sila together?

“That was beautiful! It was something I’ve been dreaming for a long time for eight years, finally waking up next to her.

"It was that feeling I will never forget. Priceless feeling!

"She’s even more beautiful in the morning.”

“When the doors opened! It was the first time I saw her wearing a wedding dress.

"My wife walking down the altar. The rest of my life coming towards me.

"That was an amazing feeling and that was so good.”