The PEP List Year 2: Celebrating The Brightest Stars and Most Exciting Shows of 2014 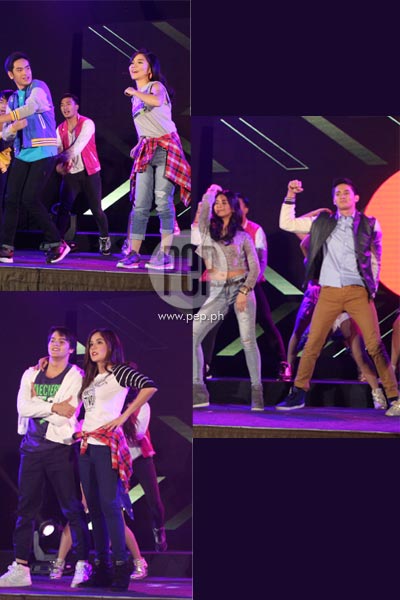 The network war was temporarily set aside during the awards night of The PEP List Year 2, as Kapamilya teen stars Jairus Aquino and Sharlene San Pedro, Kapatid Mark Neumann and Shaira Mae, and Kapuso Ruru Madrid and Gabbi Garcia gave their all to make the opening number a rousing success.

Following the success of last year’s recognition of the brightest stars and most exciting shows, PEP.ph (Philippine Entertainment Portal) returned to Solaire Resort & Casino for The PEP List Year 2, on Thursday evening, June 18.

Despite the unexpected heavy rains and ensuing traffic, the stars—all dressed to the nines—made it.

Vice Ganda, the recipient of TV Star of the Year (Male) award, had to finish his taping for Gandang Gabi Vice prior to the event. He reached the venue in the nick of time.

In his speech, he shared the recognition with fellow nominees and colleagues in the industry, “Lahat naman tayo pare-parehas na nagtatrabaho nang maayos.

Meanwhile, the TV Star of the Year (Female) winner Kris Aquino couldn't make it because the time of the event coincided with Aquino and Abunda Tonight.

In her speech, she quipped, "And dami ko nang absent...makakaltasan na ako..."

Then, she stressed the importance of having a good relationship between the stars and media, lauding PEP.ph (Philippine Entertainment Portal) editor-in-chief Jo-Ann Maglipon and her team.

“...she knows how to establish relationships with stars.

“We have to befriend each other, hindi puwedeng adversaries tayo.

"Because the way for us to bring out the news in the best possible way, and in the most truthful way, is that we keep communication lines open.”

FROM PEP WITH LOVE. For her part, Ms. Jo-Ann Maglipon emphasized in her welcome remarks that the night belonged to all the folks in showbiz as PEP's gesture of gratitude.

She said, “What we’re holding is really a thank you party.

"Because what we have is a list that is, at heart, a thank you to the stars, networks and shows that gave us the best and most exciting entertainment in the whole of 2014.”

She spoke of the tedious process of selection, screening and deliberation undertaken by the PEP team to deliver a list as unsullied as the intention of the website.

“When we said we want to be the reliable showbiz meter, we meant it.

“And it is our hope the entertainment industry appreciates the method by which we do as we say,” Jo-Ann said.

STARS' ALL-OUT SUPPORT FOR PEP. And they came.

Jennylyn Mercado and Gabbi Eigenmann had to be excused from their shoot—meaning, their respective managers Kat Aguila and Perry Lansigan had to ask permission from the producers so they can be allowed to leave.

The two are the first recipients of Teleserye Actress and Actor of the Year awards.

Fan favorites Kim Chiu and Xian Lim were very glad their shoot was packed up earlier.

The red carpet segment, which was aired via livestream and hosted by Miss International 2013 Bea Rose Santiago and eventologist Tim Yap, spelled glamour and elegance.

NO NETWORK WAR. The established and rising stars of the three TV networks also came.

Janno Gibbs, Ogie Alcasid and Alice Dixon hosted the evening's festivities, and kept it upbeat with their quirky repartees onstage.

Migs and Maya followed the performance of Gimme 5 with their own renditions of “Say Something” and “Lost Stars.”

Jay-R and Kyla reunited to sing their rendition of “Say That You Love Me,” while Christian Bautista and Jonalyn Viray sang “Come What May” from Moulin Rouge.

The official auditor is the independent auditing firm, Punongbayan & Araullo.