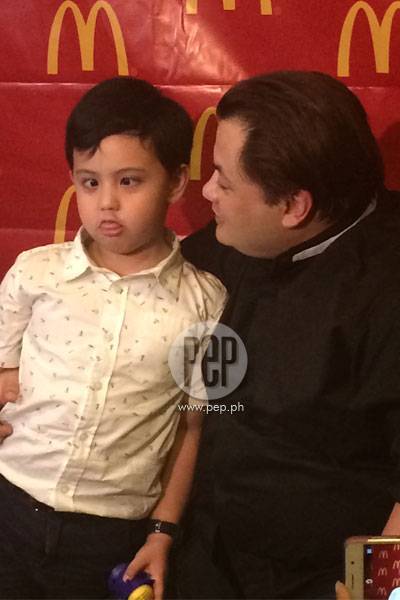 Named after two Formula One drivers, Alonzo Andretti Muhlach, Niño Muhlach's youngest of two boys, is a five-year-old headed for the big leagues in Philippine showbiz.

Despite having been stuck in traffic coming from his school La Salle Greenhills (on a rainy, stormy day no less), Alonzo came out of his sumpong and tantrum like a pro.

The kid arrived slightly tired and was actually crying.

And how did his dad get him back into a good mood?

This, among other things, became our topic during the press launch of their latest TV commercial.

2. This major campaign for McDonald's feels like a revival of sorts for Niño.

Niño also said that working with Alonzo was a bonus.

3. Alonzo was a natural on-cam.

He disclosed, "Sa sarili lang niya yung 'Mac-mac-mac,' a lot of it were adlibs on his part, they kept a lot of his natural takes and a lot were adlibs, natural na natural!"

4. Niño said their endorsement makes him "feel at home."

He recounted an anecdote about traveling to China one time with his own dad.

5. Alonzo's mom, though "mahiyain," will join the wonder kid in one of the print ads.

6. The child star's bonding time with his dad involves "playing and telling jokes to each other."

Niño shared, "Mas takot kasi siya sa mommy niya. Every time na may gusto siya, like he wants to go to the playground, he goes to me, 'yan yung bonding time namin.

"I want to be a cool dad so I make sure I spend time with him. Pero kailangan din ng patience pag ganito ka kulit anak mo."

7. Alonzo's money will be untouched.

8. Niño describes Alonzo as "palayakap, pala-kiss and very thoughtful siya." We all saw that in action.

Alonzo chimed in, "And sometimes I give him massage!"

9. We also find out that Alonzo loves his school's library and basketball.

They won't be working on any more new projects together for now, though.

11. Alonzo is improving his Tagalog.

12. One Niño's priorities: make sure Alonzo enjoys his childhood.

“When he was doing Inday Bote and Wansapanatym, wala siyang movie. After the movies, if may TV, balik doon."