Aubrey Miles still gets kilig over Troy Montero; wishes to have baby girl 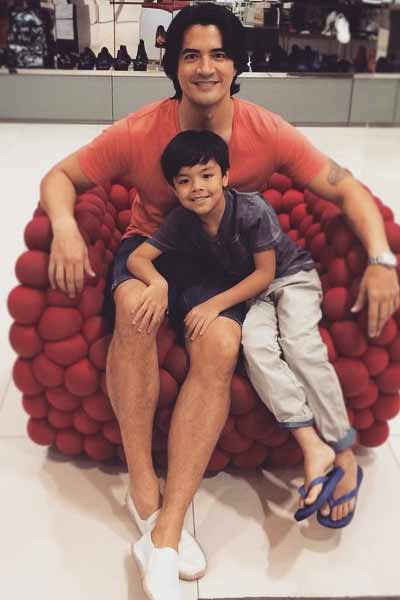 Aubrey Miles wishes to have a baby girl. Troy Montero threw in, “You know, as long as there’s a vehicle big enough to transport all of us. And as long as she’s open to it..."

When asked about being a family man, hunky actor/host/model Troy Montero answered in a heartbeat.

“It is awesome,” he told PEP.ph (Philippine Entertainment Portal) at the recent launch of Swiss Timepiece Bomberg in Chaos, City of Dreams.

Sporting a “man-bun,” he gave a hip and cool vibe.

Smiling, he said about his look, “I think every dad would like to think so.”

Troy added, “You know, but for my kids, probably not.”

Happiness is watching you grow up, I love you buddy.

THE FAMILY MAN. Troy and his partner, Aubrey Miles, have a six-year-old son named Hunter.

Troy also looks after Aubrey’s son from a previous relationship, Maurie, who is 14 years old.

“Aubrey and I used to go out quite a bit, but a lot changed after you have kids,” he said as he described his everyday routine.

“I’m definitely now more of a morning person than I am a night person.

“So both my kids go to school, so I’m in charge of waking them up and getting them out to school, and Aubrey picks them up from school.

“So, I take them to school, then her and I go back and meet at the gym and then from the gym, I go to work, and then she picks them up.

“And then I come home and we’ll have dinner together. That’s our basic routine.”

Troy isn’t shy about showing his affections for the boys. He floods them with his hugs and kisses that the boys often tell him to "Let go, Dad!"

“They just probably think I’m their old dad,” he said.

“I’m a nerdy dad and things like that. I still want hugs and kisses and they’re like, ‘Daaaad!’ you know?”

GOOD COP-BAD COP. For Troy, he doesn’t believe in the parent game of good cop versus bad cop. Troy believes that he and Aubrey share anything “which is good.”

“We take turns because we definitely don’t want one person to mean more than the other.

“There’s a lot of things that, let’s say, happens when I am not there. She’ll tell me ahead of time, so when I get home, I know what’s going on or vice versa.

“We share the discipline roles, and I definitely think there should be a front together.”

As a dad, there is one thing Troy wants his boy to always remember—and that is respect.

“It is so easy in life to be like a bad guy, so I want them to be a good guy.

“I want them to respect people, and mostly how to treat them, ‘Hey, be a gentlemen.’ Hopefully they see that.”

AUBREY, "STILL KILIG." In a separate interview with Aubrey that evening, she said Troy is more of the good cop.

Aubrey is thankful that they still have the same kind of relationship for 13 years and counting.

“You know what, we’ve been together for 13 years now. I still get kilig. I still crave for him.

On why she accepted the role, Aubrey simply said, “This one is a Colombian soap franchise. So feeling ko parang may mark, parang may dating. Iba. Iba siya.”

BABY PLANS. Being the only girl in the family, Aubrey hopes to have a baby girl.

Troy threw in, “You know, as long as there’s a vehicle big enough to transport all of us.

“She wants two more or maybe three more and that’s okay. Let’s see if this year’s a lucky year.”