Maria Ozawa on falling in love: “It makes girls prettier.” 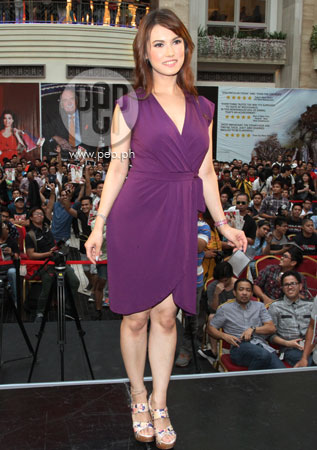 Maria Ozawa says it's harder for her to be in a serious relationship right now because, “I don't have any guy that won't hurt me.”

Out of curiosity, PEP.ph (Philippine Entertainment Portal) asked her some serious questions about love during the FHM autograph-signing on Friday, June 26.

And here are a few things we discovered about the 29-year-old Japanese adult film actress.

Have you been in seriously in love?

How was the experience?

“It was really nice but it was heartbreaking.”

Why is it taking too long for her to be in a serious relationship again?

She replied, “If you really like that person, you get really worried every day.”

Despite the bittersweet experience, Maria never stopped believing in love.

“I like the feeling when I fall in love. It makes girls prettier,” she smiled.

What will make Maria fall in love with a man?

If a fan would ask her out, which activities would she enjoy?

“Perfect date would be like we'd go out in a nice dinner, have spa together, watch movies, and he could buy me presents.”

Would she kiss a guy on first date?

She quipped, “Maybe, if he's handsome!”

How about having a Pinoy boyfriend?

“Of course, he has to be a gentleman.”

So there boys, you heard it, the currently-single Japanese actress is willing to go out with a Pinoy.

However, she will be flying out of Manila on Sunday, June 28.

But she will be back in August to start filming her movie with Robin Padilla titled Nilalang, which is one of the eight official entries in 2015 Metro Manila Film Festival.