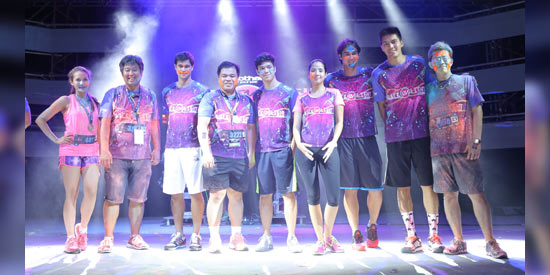 The Brother-Color Manila Nite Run: Blacklight Edition started its first leg in Manila at Filinvest City, Alabang. Over 7, 000 participants joined the color fun run and in return, this made Brother Philippines even more pumped up to introduce the 6K fun run race category.

Who would have thought that literally adding color to fun runs will bring out the fun?

Imagine glowing in splashes of orange, pink and yellow and dancing the night away to good dance music after a good run (or walk) with your family and friends? Seriously, this kind of fun run is a thing!

EXTRA RUN. EXTRA FUN. For the month of May, Brother International Philippines Corporation (Brother Philippines) took the Philippines by surprise as it recharged and redefined the meaning of “fun” in fun run.

The Brother-Color Manila Nite Run: Blacklight Edition started its first leg in Manila at Filinvest City, Alabang. Over 7, 000 participants joined the color fun run and in return, this made Brother Philippines even more pumped up to introduce the 6K fun run race category.

Instead of the usual 5K race category, this special race category was in line with the Refill Tank System’s ultra-high 6,000 page-yield feature.

Premium items were given to runners who participated in the said race category. Lucky runners also had the chance to take home Refill Tank System Multi-Function Printers of their own.

COLOR FESTIVAL. After the run, participants were treated to a night of music, dance and color. Brother’s Celebrity Digital Influencers JC Intal, Karylle, Phil and James Younghusband and Elmo and Maxene Magalona readily joined the crowd in this unique color festival.

“It is very different,” Elmo Magalona says as he watches the crowd glow in neon. His sister, Maxene adds, “The energy here is really good. It’s so positive.”

Phil Younghusband lights up as he speaks about the fun run’s purpose to bring out everyone’s bright hue.

“I’m one of those who want to spread positivity and spread joy. Just having the bright colors here, it makes people happy. It gives a positive vibe and the color sends out a fun and enjoyable atmosphere.”

The Refill Tank System printers have the suggested retail price of Php8,450.00 for the DCP-T300 and Php9,450.00 for the DCP-T500W inclusive of taxes and a one-year Standard Warranty one plus one-year Extended Warranty, or 30,000 pages that is supported by the Brother Philippines Service Center.

This Brother Refill Tank System series is designed for the economical users who seek efficiency with their printers.

Brother continued with its second and third leg at Cebu City and Davao City. Cebuanos and Davaoenos were delighted to the same kind of energy that Manila participants were treated to.