Only in YES!: Willie Revillame’s Tagaytay villas and his rags-to-riches life story 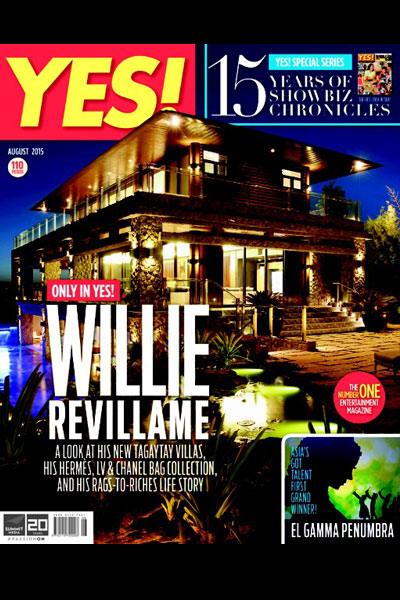 Here's part two of YES! magazine's extensive feature on Willie Revillame. Also in the August 2015 issue: a series on showbiz chronicles in celebration of its 15th anniversary.

Willie looked back on those times in the August 2015 issue of YES! magazine.

In Caloocan, he remembered calling for passengers of jeepneys plying the routes of what were then Valenzuela and Bulacan.

Willie also shared—with the help of his mother Myrna Buendia and paternal uncle Carlos Revillame, who were visiting him in different times during the YES! interviews—stories on how his parents met, how he came along, and how he lived as a product of a broken family.

He regretted not having a healthy and nurturing family life. But he chose to look at the bright side of life.

Willie, who hosts the Sunday-afternoon variety show Wowowin, which he produces as a blocktimer for GMA, opened the doors to his prime properties in Tagaytay City.

These properties included his third house in Tagaytay Midlands, his condo in the Woodridge Place at the Highlands, and his villa in Barangay Iruhin.

His life story and his Tagaytay homes are part of the magazine’s extensive feature on Willie, which began in the June 2015 issue.

In the August 2015 issue, YES! also began a series on showbiz chronicles in celebration of the magazine’s 15th anniversary.

The first part of the series zeroed in on the magazine’s maiden issue, which was released in April 2000.

Another must-read in the current issue is the feature on El Gamma Penumbra, the shadow-play group from Tanauan City, Batangas that won the first grand prize winner in the premiere season of Asia’s Got Talent.