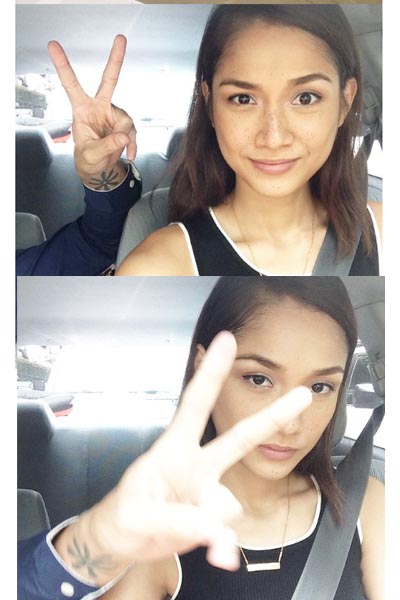 Monika Sta. Maria revealed one thing she learned from Asia's Next top Model Cycle 3 grand winner Ayu Gani: “She told me na don't let uncomfortable situations or people get to you."

Monika Sta. Maria, first runner-up in the third season of Asia's Next Top Model (AsNTM) is taking big and small steps to realize her dream of becoming a supermodel not just in Asia but in the world.

At the opening of the Sofitel Philippine Plaza's French month celebration, PEP.ph (Philippine Entertainment Portal) caught up with Monika.

She was at the event with steady beau, Fil-Brit singer-model Charlie Sutcliffe of TV5's Juan Direction at Spiral enjoying a hearty French feast.

But prior to this encounter, PEP last spoke to Monika during an ANTM and Tresemme press event in GMA-7 where she promoted the show's airing on the Kapuso network.

Monika said during this Sofitel event that life now is much, much better despite her failure to clinch the top spot.

"Kasi then, nobody knows ano ang nangyari and all I know is, 'Ah, 'di ako ang nanalo.'”

It was even a bigger challenge being pestered by people regarding the results.

She recounted, “People would always ask me, 'Ikaw yung nanalo, 'no?'

“It's flattering, 'di ba, kasi they really believe na it's you pero the secret I kept na I'm second place... At that time, I don't know what to say.”

KEEPING THINGS SECRET. Monika, like her fellow contestants, had to the result since end of January 2015!

She couldn't even imagine how she managed—always aware of the fact that she didn't win but needing to face the constant barrage of people asking about the results.

“It just happens that when you are faced with the situation, you just have to overcome, you have no choice,” she admitted with a shrug.

Even the select few she entrusted with the results, she had to constantly remind them of her non-disclosure agreements with AsNTM.

“I told them we have to pay a huge amount of money, we will get sued, and no matter how much we work for the rest of our lives, we can't pay for it!”

Now that the results have been officially announced.

“When I came fresh from the show, when nobody was watching, it was sad, of course, for me. But now that people have watched, the overwhelming support is crazy.”

Despite her loss, she feels she has enough reason to be thankful.

“The people really make me feel na it doesn't matter, I feel like I have proven myself anyway and so I am very happy and I feel so blessed right now."

BIGGEST LESSONS. Monika, who entered the competition focusing on herself, learned to overcome one of her character weaknesses as she worked with others.

She disclosed, “I am usually the person who would run away from uncomfortable situations. 'Pag may naiinis sa akin, parang okay, I just go away.”

AsNTM taught her to confront these types of situations over and over again.

The statuesque beauty admitted, “Working in this environment, you will have people who will clash with you.

She added, “Tensions become exaggerated especially with reality TV, they build that up kasi it's more interesting na let's focus on the tension.”

Ayu Gani, the winner of AsNTM cycle 3, was one of the sources of tension for Monika.

She revealed, “It didn't come out from nowhere, it was there but of course for TV, it's even more exaggerated. Pero after the show naman, nag-uusap naman kami. Okay naman ngayon.”

One thing she learned from Gani, “She told me na don't let uncomfortable situations or people get to you.

“Not everyone will love you and you just have to be able to confront these situations and never run away from it.

“It will affect your performance if you let it affect you, na ayaw niya yun sa akin. So she made me a stronger person.”

Add to this, “Gani also told me never let haters affect you and in the future, naging friends naman kami.

“Everything turned out great in the end.

"Pero it's hard when you hear somebody not liking you and she made me strong.”

With her head held high, she declared, “I wanna make my modeling dreams come true. Things like that.”