Edu Manzano says age not a hurdle to doing what he wants: "I feel I’m unstoppable." 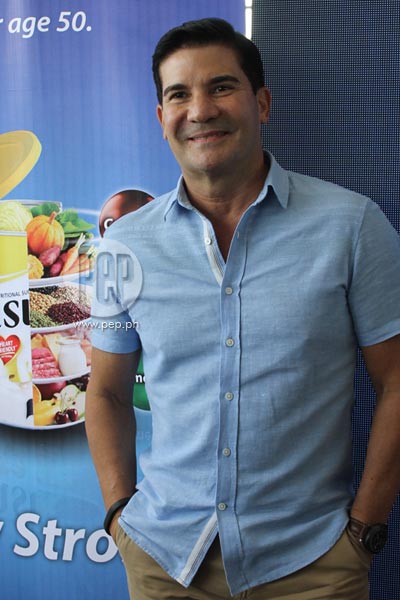 Edu Manzano finds the young actors "more professional than those in the past."

2015 marks the return of Edu Manzano as an actor.

“I stopped teleseryes in 2006, movies in 2004 because I concentrated on the businesses,” the returning Kapamilya star tells PEP.ph [Philippine Entertainment Portal] in a sit-down group interview at a media event for the Ensure Stay Strong Campaign at the SPARTA Sports and Recreational Training Area last July 23.

He returned to film earlier this year with Halik sa Hangin starring Julia Montes, Gerald Anderson and JC de Vera and Bridges of Love is Edu’s return to the world of teleseryes.

“And, ahh, ewan ko, naisipan ko lang, sabi lang ng ABS, ‘Uy, Edu! You should see—this is a different one, teleserye,’" Edu recalls the time Bridges of Love was first offered to him.

ACTING AS A PROFESSION. Edu describes the lifestyle of a celebrity as “exhausting,” with their taping schedules maxing out to 28 work hours.

“I had to re-do, re-calibrate my entire being,” he emphasizes.

Health and fitness has been second nature to him, with his athletic background extending over to his military service at the US Air Force.

Four years ago, Edu was shaken when he learned he had acquired asthma Because of this, he changed his perception on his way of living.

“So sometimes, you can’t blame the actors if they’re not in their, they didn’t come in their A-game.”

With his return to acting, Edu has gained a new level of appreciation for the industry and the young actors.

“I have to admit that the artists today are a lot more professional than those in the past—when I first started.

“It’s a profession, you know, that you can hold on to your entire life.”

PASSION FOR LIFE. When asked about choosing between Edu the businessman and Edu the actor, he sees them as apples and oranges.

“For me, I’ve been doing it [acting] for so long already.

“You know, it’s a—it’s—you walk into a room and you can feel this is your life.

“The business side is because I am very realistic.

“You know, it’s not something that will last forever.”

Turning 60 this year, Edu enters another decade of his life with a fresh pair of eyes.

“I discovered I have passion for life.

“I feel stronger now. I can do so much more.

“Sa nararami nang athletics, you know I find myself that I have greater stamina now.

“So right now, acting is just one. But right now, I just feel I’m unstoppable.