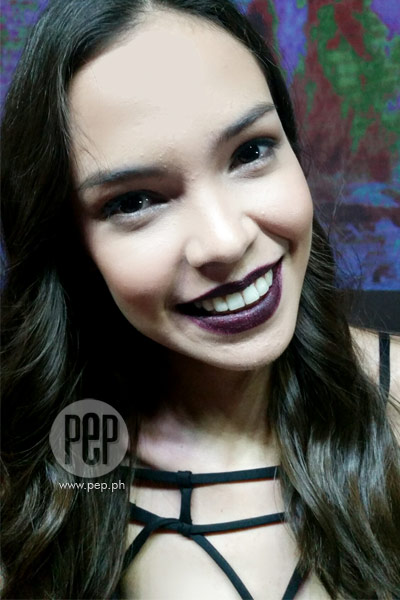 Samantha Lewis is half-Filipina, half-British. Her mother is Ilocana and her father is British.

“My friend used me as a model. And because that’s a competition, he wanted me to wear proper clothes.

“Sabi niya, 'I’ll bring you to my friend who’s a designer and this person is Edgar San Diego.’

“At that time, he was president of FDAP [Filipino Designers Association of the Philippines].

“He [Edgar] asked if I want to model na and he asked me kung meron na akong agent or something. Sabi ko, 'no agents, no agency.'

“He got my number and said they were having an upcoming anniversary show in a few months. He said he’ll contact me.

“I didn’t think it would go anywhere kasi , it’s [modelling] here in Manila and I’m there in La Union.

“But it was February when I got a text message from Tito Edgar. I was in Baguio then. He asked me to come over.

“I think I took one day off from school just to travel to Manila. Overnight lang and went back to La Union.

“And he invited me again in March, but I was graduating fourth year high school and then I couldn’t [go to Manila]."

“I had to leave the country because my family wanted me to move to Europe that time.

"But then after four to five months [in Europe], I got homesick and I wanted to go home.

“My uncle in the States and in London agreed. So I came back and then that’s when I started school."

“They would always tease na, ‘Ah, si Sam noong nag-aaral pa 'yan hindi mo mahahagilap.’ If they tried to book me, I always turned it down if I have school and hospital duty."

Sam felt bad. But her boyfriend back then said maybe, it happened for a reason.

“He said, ‘You should prioritize things.’ It made me feel better,” patuloy ni Sam.

“Kasi one week, I turned down a shoot in Amanpulo, Balesin, and one more beach area. Magsa-summer pa lang no'n.

“My heart was breaking. Parang two days pagitan lang I got another text na, ‘Hi, Sam. I’m from ganitong magazine. Are you free for an out- of-town shoot?’

“I always turned it down kasi I’d rather not do a show than miss a class or hospital duty.

“There were times naman na if I’m free. Hahabol ako. So I got there in my uniform.

“Kaya direk Robbie Carmona [a fashion director] would always make fun of me.

TOURISM TO NURSING. When Sam entered college, she enrolled in a B.S. Tourism course in University of the Philippines.

“My family was pushing me to take up Nursing because that was the height of Nursing,” sabi niya.

“Unfortunately, Nursing is [offered] in UP Manila only. They don’t accept transferries or shifties.

“My brother was in FEU [Far Eastern University] that time, taking up Nursing.

"So my choice was to move to FEU na lang, where my brother and my cousin were.”

Sam graduated from Nursing with honors in 2011, took the board exams right after and passed it.

“So I was one of their models for one of their trends. I think it came to that point where you think na I’m getting older na.

“I wanna get a stable job. Priorities change.

Patuloy pa niya, “I’m employed by MAC since last April as PR [public relations]. But right now, we’re been working towards my partner Vanessa Vergara being more on press relations and me handling artist relations.”

READ The Enchong Dee-Samantha Lewis love story: It all started with a Viber message