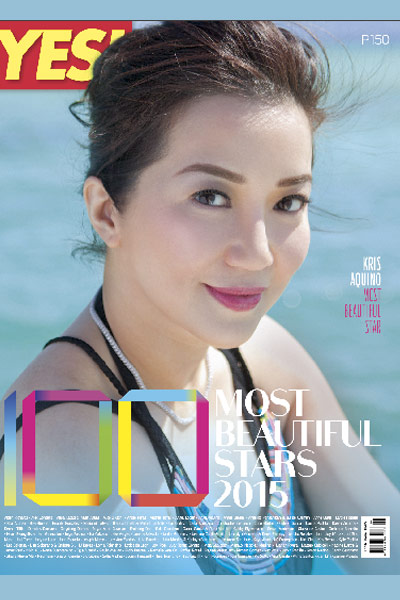 YES! magazine’s 100 Most Beautiful Stars 2015 special issue feauting Kris Aquino on its first-ever dual cover is now available at newsstands and will soon be online on Buqo, Zinio, and Apple Newsstand.

YES! magazine has unveiled the cover star for its 100 Most Beautiful Stars 2015 issue, and it’s none other than Kris Aquino.

“The star who has been called Queen of All Media for much of the decade has always been about confidence and aplomb.

"Yet she told YES!, during her interview for this edition: ‘Siyempre, hindi ko naman binobola ang sarili ko. Alam ko naman na it had a lot to do also with my track record sa inyo na bumibenta…’

“Strange. Who is 44 and looks like that? Fresh, young, alive—and owns the room she walks into?”

Maglipon added: “Kris had a way of becoming what she wanted to be. When she was happy, the whole house knew it. When she felt pretty, we all saw it.”

Preparing a list of the year’s most beautiful stars “is not an exact science,” Maglipon pointed out.

“This is our subjective, collective List, borne of our criteria and taste, propelled by our own inner excitement about the people we write about.

Yes, our List is as much about us as it is about the stars whose names appear on it. That’s the way any talk of beauty goes.”

The collection of photos and short articles is divided into several categories, starting with “Phenomenal,” a group that includes Daniel Padilla, Toni Gonzaga, and Vice Ganda, and closing with “The Idol,” a title apt for the one celebrity under it, Joey de Leon.

As 2015 is YES! magazine’s 15th year of publication, the category “Most Beautiful Cover Stars” brings readers back to a big part of the magazine’s journey.

Included in this category are, of course, the stars who were selected to be on the cover since this YES! special issue started coming out in 2007: Judy Ann Santos, KC Concepcion, Marian Rivera, Kim Chiu, John Lloyd Cruz, Anne Curtis, the Julia Montes and Kathryn Bernardo tandem, and Sarah Geronimo.

YES! magazine’s 100 Most Beautiful Stars 2015 special issue is now available at newsstands and will soon be online on Buqo, Zinio, and Apple Newsstand.