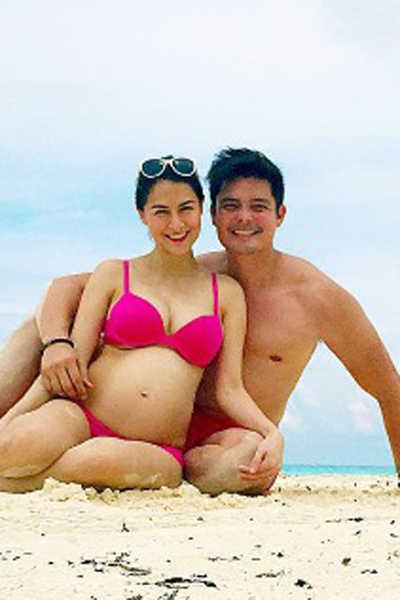 Now seven months pregnant, Marian Rivera flaunted her baby bump when she and husband Dingdong Dantes spent her 31st birthday in Amanpulo Island, which is found in Palawan, which is special to the couple.

Trivia: Amanpulo is where they had their first island date six years ago, and their baby is said to be made in El Nido, Palawan, where they spent their honeymoon last February.

Early today, August 14, she posted a photo of her in a two-piece swimsuit.

Yesterday, Marian sizzled in a hot pink bikini, making her a woman women love to envy.

MARCH 24.Did it look like she's two months pregnant here? Definitely not.

At the time she posted this OOTD (outfit of the day), she was perhaps clueless about her pregnancy. 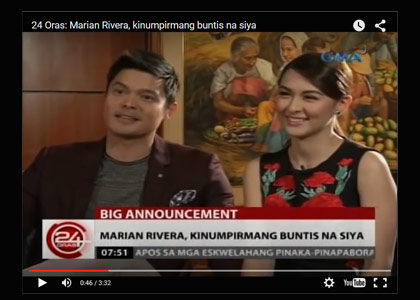 APRIL 13. Marian and Dingdong announced that they are on the family way.

She was then three months pregnant.

I wish to salute you everyday for gracefully carrying our gift. A clear preamble of how you'll be when that day comes. From today, and all succeeding years hereafter, you will be recognized for this new remarkable designation. I'm proud of you. Happy Mother's Day! #MyBabies

MAY 10. Dindong posted Marian's first official baby bump, sending his wife a special Mother's Day greeting.
Did he say bump? Where is it?
By this time, Marian is four months pregnant.

JUNE 14. Dingdong took a candid photo of his five months pregnant wife lounging outside a restaurant in Tagaytay.

In a previous interview with Arnold Clavio, Marian said that her husband likes to post pictures of her baby bump.

Pretty soon, we will have to make a decision on what she should wear first ðŸ˜‰

JULY 23. Marian posted on her Instagram account that she's going to be part of GMA's Sunday Pinasaya.

Three months prior to this, the Kapuso Primetime Queen decided to prioritize the baby by giving up her lead role in The Rich Man’s Daughter, and canceling her GMA Pinoy TV guestings abroad.

But she has remained visible in different events and on television guestings because her doctor advised her to stay active.

AUGUST. She's now seven months pregnant, and will probably give birth on the first week of November.