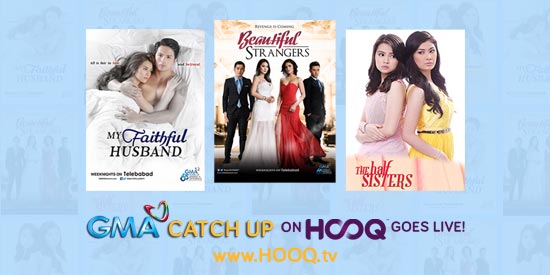 HOOQ is available to all iOS and Android users, through apps on the iTunes and Google Play stores, while computer users can also access the service on their browsers.

HOOQ, Asia’s biggest premium video-on-demand service, goes live from August 15 with a first in the region—a catch up service for GMA, one of the biggest TV networks in the Philippines.

HOOQ subscribers will be able to enjoy GMA’s newest primetime TV series just 24 hours after airing, in addition to over 30,000 hours of Hollywood and local movies and TV series.

HOOQ will kick off with My Faithful Husband and Beautiful Strangers, which just premiered on GMA on August 10.

My Faithful Husband features Jennylyn Mercado and Dennis Trillo playing friends in a marriage of convenience, while the widely anticipated sizzler Beautiful Strangers features the tandem of Lovi Poe and Heart Evangelista in a story about a fierce rivalry between two friends.

In addition to this GMA catch-up service, HOOQ subscribers have been enjoying more recent GMA top-raters such as My Husband’s Lover, Amaya, Ang Dalawang Mrs. Real, Impostora as well as GMA classic hits such as Adarna, Encantadia and Mulawin.

HOOQ holds the biggest library of GMA content among any subscription video-on-demand service.

"Today, GMA’s partnership with HOOQ just got stronger. Making our newest content available on their platform immediately after local airing via their new catch-up service is a major milestone for us."

Jane Cruz-Walker, country manager of HOOQ Philippines, added, “We are proud to be the only video-on-demand service in the region hosting the top Philippine studios and TV networks.

"Now with the 24-hour window to GMA’s primetime TV series, viewers are sure that they won’t miss out on their favorite TV shows.

"More importantly, we want our customers to continue to enjoy the largest and best catalogue of Hollywood and local content of any service available today."

HOOQ is available to all iOS and Android users, through apps on the iTunes and Google Play stores, while computer users can also access the service on their browsers.

Every Filipino can get HOOQ’d on a trial basis for 30 days or more!

HOOQ is currently available to Globe subscribers through various plans and promos.

GoSurf subscribers with a minimum Plan 299, for example, will get a three-month bundled HOOQ subscription.

Tattoo broadband customers, on the other hand, will likewise enjoy access to HOOQ’s extensive content library complementary with plans 1299 and up.

Subscribers can also charge the subscription fee to their credit card for only P199.

HOOQ is Asia's first premium video-on-demand service to launch across the region. HOOQ is a start-up joint venture established in January 2015 by Singtel, Sony Pictures Television and Warner Bros.

HOOQ delivers over 30,000 hours of Hollywood blockbusters and popular local programs to customers anytime, anywhere by enabling them to stream and download their favorite shows on their internet device or platform of choice.

HOOQ currently operates in the Philippines, Thailand and India with a population footprint of over 1.4 billion people. For more information, visit www.hooq.tv.