TJ Trinidad finds a way to help without entering politics; pledges "habang-buhay" commitment to his role as Operation Smile ambassador 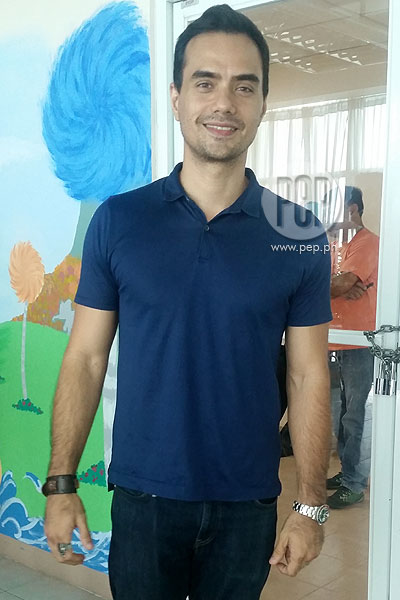 TJ Trinidad on supporting Operation Smile's mission to help kids with cleft lip and cleft palate: “They tend to be shy. Hindi sila nakakapasok, nakakapag-aral. This helps boost their confidence. It gives them an option to have a brighter future.”

TJ Trinidad said he has no plans of entering politics again.

After his failed bid for a councilor post in Pasay City last May 2013 elections, and after the pork-barrel scam of Janet Napoles hit the headlines, he realized that politics is not his cup of tea.

TJ elaborated, “It opened my eyes to a lot of things.

"It made me realize of course that, first of all, a lot of people need help.

“At that time, the Napoles thing broke out, and ten billion pesos being siphoned and that’s just the tip of the iceberg.

“'Tapos you go around and see mga families nakatira in between buildings.

“You see kids being born into poverty and not being given the opportunity that other people have, magagalit ka talaga.

“I decided that its really not for me.

“I tried it because I wanted to help. I was curious also. It really wasn’t for me.”

OTHER WAYS TO HELP. The 39-year-old Kapuso star decided to pursue a different advocacy, and became an ambassador of Operation Smile.

Operation Smile is a non-profit organization that provides free facial surgery to children with cleft lip or cleft palate.

TJ first got in touch with Operation Smile after meeting some children with cleft palate, while making rounds during the campaign period two years ago.

Sans any publicity, he has been supporting Operation Smile until he was officially chosen as one of its celebrity ambassadors a few months ago.

The Kapuso star got the chance to personally visit the beneficiaries at the 8th floor of Sta. Ana Hospital in Manila City, this Thursday, September 3.

A father of two kids, TJ told PEP.ph (Philippine Entertainment Portal) his heart went out to the kids who were scheduled to undergo reconstructive surgery that day.

"It makes you realize how blessed you are to have healthy kids and that’s really one of the most important things.”

TJ didn’t hesitate to be part of Operation Smile because even a little help, he said, will go a long way in changing the lives of the kids with cleft lip and cleft palate.

He actually has a team of people who help him identify possible beneficiaries of Operation Smile.

“I was just sending the children here, take care of the transportation, every thing, just to get them here.

“It’s also that they don’t have the funding to bring their kids here.

“We find a way to get them here. May konti pang merienda para at least they are comfortable.

Operation Smile is ready to provide this surgical treatment for free to kids (and even adults) at the Sta. Ana Hospital.

Aside from the facial surgery, they also provide medications for post-operation health care.

For TJ's part, he pledged his 100 percent commitment.

“This helps boost their confidence. It gives them an option to have a brighter future,” TJ stated.