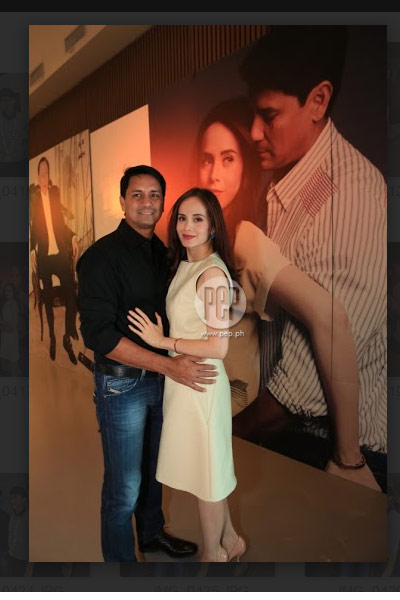 "There is so much local talent. It's about time that the world finds them," says Lucy Torres-Gomez about the latest endeavor of Bench, the Love Local book.

She also remarks, "I love that big companies have embraced this [the book project], and I love that there are so many local artists."

The book captures the appreciation of 100 Filipinos from all walks of life—celebrities, politicians, artists, singers, men and women on the street—for anything Pinoy through artwork and articles with glamorous photos.

Lucy and her husband, actor Richard Gomez, are of course featured.

"The camaraderie among Filipinos is admirable. There's always somebody willing to lend a hand," the congresswoman of Leyte's fourth district adds.

BENCH ROYALTY. The clothing company has come a long way since its first TV commercial starring Richard, who rowed across Taal Lake wearing a sleeveless shirt, was aired.

Then he was joined by Lucy, who became the face of Herbench.

Richard and Lucy's 14-year-old daughter Juliana was launched as one of "Benchsetters" in 2013.

The lady reveals why their family has remained loyal to the brand.

"I think that is what keeps Bench interesting and relevant—the fact that they continue to reinvent themselves, they adopt all these causes and for them.

"It's never just about passion.

"It goes much deeper than that. It's a lifestyle."

JULIANA AS TEENAGER. When asked about their unica hija, the lovely mom says, "She is as fourteen as fourteen-year-old girls are now.

That's because at her daughter's current stage, Juliana attempts to develop an independent identity apart from her mom and dad. This is normal and healthy, according to most parenting experts.

Lucy admits, “I miss those days when she would hang on to my skirt and ask me, 'Mama, can I go with you?'"

But don't get her wrong, the politician/ mom says she's adjusting well to rearing a teenager.

"I'm okay. It's just that everything has to be managed... I won't say okay na, she can do whatever."

Lucy would still want Juliana to learn the dalagang Pilipina values she grew up with in Ormoc, Leyte.

"Hindi naman naka-baro't saya, pero values are very important. I think they shouldn't get lost in the modern times."