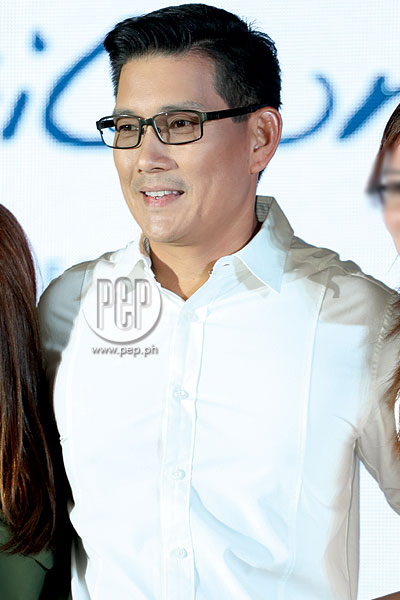 Richard Yap, who was already 44 years old when he entered showbiz, said age should not deter a person from achieving his goals. “We should never quit. Quitting is not an option,” he said.

In just about four years, Richard Yap has become one of the most sought-after endorsers and leading men in the country.

He was 44 when he bagged the role of Papa Chen in ABS-CBN's primetime teleserye My Binondo Girl.

Then he became Ser Chief in the successful daytime TV series Be Careful With My Heart, where he was paired with Jodi Sta. Maria.

Now 48, the Filipino-Chinese actor believes no person is too old to chase his dreams.

“We have to reach for it, we have to follow it, and turn these dreams into reality. We have to live it,” Richard said at his launch as the brand ambassador of Filinvest Land, in SM North EDSA The Block, last Thursday, September 17.

Richard continued, “I always say you’re never too old to start something new."

He cited one of his inspirations, American country singer Kenny Rogers.

“He started singing at age 53, and he actually had his moustache to actually make him look younger.

"So it’s never too late to start, and dreams will always be there for you."

But of course "believing" in yourself is not enough.

“You have to really work hard for it. A dream is like a goal in life.

"We should all work hard towards that. We should never quit. Quitting is not an option. Kayod lang nang kayod.”

Struggles, he said, are inevitable, but they make the journey even more worth it.

FINANCES. Richard also pointed out the importance of investing and finding ways to grow it.

Way back in college, “I was working already part-time because I want to earn extra income.

“It was very challenging but also very fulfilling at the same time because it helped me to be more responsible and manage my time and manage my finances also.

"And it really helped me when I had my own family and to be able to do all these things to reach for my dreams.”

To date, Richard has a pet hotel and flooring business, and co-owns a chain of restaurants.

“It is not always that you have a good income. Sometimes there’s ups and downs in the industry.

Hence, Richard has an advice for his fellow celebrities.

"Kasi some of them [celebrities], makikita mo at the end of their career, wala silang sariling bahay, walang savings, walang investments.

“So it’s really very important that you invest in something you can have for the rest of your life."

This makes him a fitting ambassador for Filinvest Land's I Own My Dream campaign, which, Richard said, "inspire Filipinos [to] dream big and work hard for their dreams."

“It’s very timely because a lot of people don’t know how to invest their money, what properties they should be buying.

"So investing in something such as your own home is very important for everyone.”

Richard is proud and to say he is now living his dream, but this does not stop him from having new ones.

“I can probably say that I have already owned my dream, so what I’m doing now is nurturing my dreams for my children’s dreams,” said the loving husband and proud father of two.