Stuck in Friday night traffic? See what Elmo Magalona, Andre Paras, and other Candy cuties do! 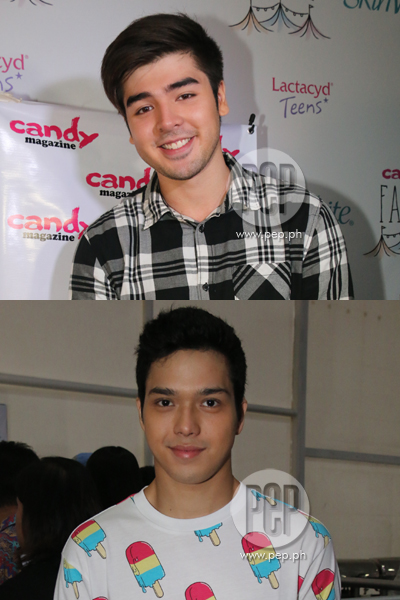 What to do when stuck in Friday night traffic? Andre Paras (left) makes random videos and entertains people, while Elmo Magalona sings his heart out. But both (actually all the Candy cuties!) love to take car selfies and videos!

With the rains and the Christmas rush approaching, traffic is gonna be so bad.

But Candy cuties Elmo and Arkin Magalona, Andre Paras, Miguel Tanfelix, James Wright, Jairus Aquino, and LA Aguinaldo have something to share to get us through the boredom when stuck on the road!

Andre Paras does what he loves: entertaining people!

He suggests, “If you have a driver, make random videos and entertain people. That’s what I love doing, entertaining people.

"Take videos. That’s something you can do—entertaining yourself and entertaining people who follow you.”

+when im stuck in traffic+

On a positive note, traffic can also artsify your Instagram feed!

Other traffic essentials for The Half Sisters actor:

“Make sure you always have extra food in your car because, based on experience, I get hungry kaagad.

“And I don’t know why, parati ako minamalas sa traffic. So when I’m stuck in traffic, parating nasa gitna ng EDSA or somewhere na walang gas stations, I have no food.”

“Make sure di ka napipikon, kasi once traffic hits, I know a lot of hot-headed drivers, they’re really annoying, and sometimes they throw coins at my car.

“It's also my fault. Nang-i-inis rin ako e kasi I try to entertain myself also.”

What are the songs he listens to?

“It’s more like I love their songs kasi they gave me their albums, I have it in my car.”

James, Nadine and Yassi are Andre’s co-stars in his 2014 movie Diary ng Panget.

Elmo Magalona's traffic moods depends on whether he's all by himself or with other people.

Another way to beat boredom is take car selfies. Check out Elmo's Instagram:

Won't you come my wayyy

This 21-year-old singer stays calm with a traffic playlist which includes “Good Vibes, Friday songs when it’s the end of the week.”

Like his kuya, Arkin Magalona loves listening to music when stuck in traffic.

The 15-year-old budding singer-actor kills time the way a normal teen does.

“I sleep, I play video games, I draw stuff on a pad of paper, and I talk to my friends like Skype or something.”

He forgot to mention that, just like his brother, Arkin also loves taking selfies!

He also prefers listening to chill music while travelling.

Here's a bonus car selfie from Miguel for the girls!

Oh wait, remember his famous "Twerk It Like Miley" dubsmash? Didn't he do that while stuck on the road?

First, Justin Bieber songs “Where Are You Now?” and “What Do You Mean?”

Next, “’God Gave Me You’ because everybody has been hooked to that song ever since Alden Richards dedicated it to Yaya Dub a.k.a. Maine Mendoza of the famous AlDub loveteam.

“And then, a One Direction song, because even though I’m not a good fan of One Direction, I really love their music. Daming meaning, e.

“Actually, I’d like to add my own songs, e. Kasi, everytime I listen to my songs, parang nasa ibang mundo ako."

I see the beauty inside , i feel your soul next to mine, baby its our chance will you say yes to me? #jameswright #gil #SL

Star Magic cutie Jairus Aquino also loves listening to One Direction, but his traffic anthem is?

“'Drag Me Down' kasi kahit sa traffic, nobody can drag me down!”

And have fun with your friends!

Aside from enjoying music, model and 2015 Candy Cuties leader LA Aguinaldo uses the time he's stuck in traffic to reflect and meditate.

“Kasi you’re in traffic, it’s a negative thing. So why don’t you make a positive out of it?

This cutie does not only have good looks and a to-die-for physique, he also knows how to make use of his time wisely.

“That’s the time I actually get the time to write down notes, plan to do in the following weeks.

“Delete photos on my phone, just to make space or just to reminisce."

Lastly, he checks via text messaging who among his friends are also stuck in traffic.