AlDub and Kalyeserye featured in "ultimate collector's issue" of YES! 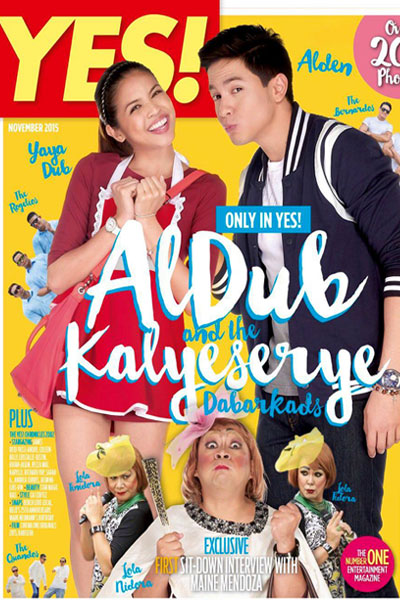 YES! Magazine puts the spotlight on the phenomenal ALDUB loveteam and the Eat Bulaga Kalyeserye Dabarkads by coming up with an “ultimate Kalyeserye collector’s issue.”

This November, YES! Magazine puts the spotlight on the phenomenal ALDUB loveteam and the Eat Bulaga Kalyeserye Dabarkads by coming up with an “ultimate Kalyeserye collector’s issue.”

Packed with more than 200 photos, this issue also comes with tons of trivia, interviews, sound bites from your favorite Kalyeserye characters and the creative forces behind the phenomenal noon-time show.

While Eat Bulaga has been a consistent leader in the ratings game, it’s the first time that the 36-year-old noontime show has a tandem that looks so good together, so well-received by Pinoy viewers of all ages, and talked-about on social media and mainstream media.

In her YES! interview, Jenny Ferre, EB senior vice president for creative and operations, gives us her take on the ALDUB phenomenon: from Alden’s harmless “smile” on camera that threw Maine Mendoza out of her Yaya Dub character to how the entire nation got hooked on the EB Kalyeserye.

"Unang-una kasi, it’s the mystery. It has a life of its own. Parang dinidiligan lang siya.”

AlDub fans would be delighted to have this issue in their collection because TV’s most lovable Yaya Dub, aka Maine Mendoza, gives a first and rare interview to YES! Magazine.

Speaking in her real, actual voice (Yes! She can talk!), Maine opens up about her “secret dream” of becoming an artista, her educational background, her family back in Bulacan, and the sudden public admiration for her and her character Yaya Dub.

YES! Magazine November 2015 issue will be available in stands this weekend.