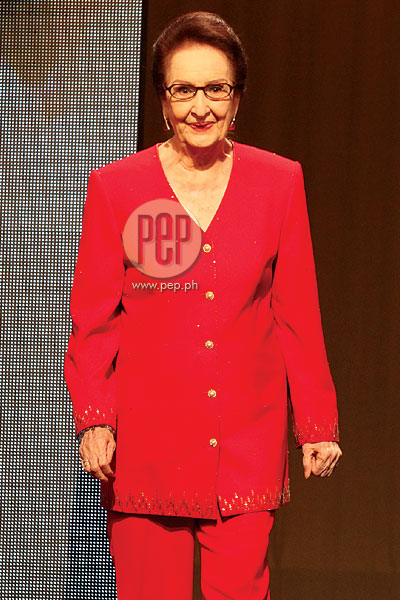 Actors and actresses know younger, equally-talented stars emerge all the time, so some of them feel insecure.

The 81-year-old original queen of Philippine cinema and award-winning actress has never felt insecure even if younger co-stars, some of whom she has worked with, have entered the scene.

“And siguro, hindi kami masyadong nagkaroon ng gano'n because they took care of us, e.

“They treated us like their children,” Gloria told PEP.ph (Philippine Entertainment Portal) on the set of her current drama series The Half Sisters, last October 14.

BEING ON TIME. Sampaguita also taught Gloria the value of being on time.

“Kami, we were trained to come on time, at hanggang ngayon, bitbit pa rin namin yun.”

Pointing to a big wall behind the area reserved for the press.

“Ngayon may recording, may appearance, may outdoor sa mga piyesta.

“Noong araw, we were not allowed to go! Natatakot sila na baka may mangyari sa amin along the way.

“At saka responsibility ng company, ng studio na they want to protect us kasi we were young.”

ESCAPING FROM FANS. She recalled a funny experience during her early years as an actress when she used a fire escape just to leave a movie house full of fans waiting for her.

“Alam mo, I had a very exciting at nakakatakot na experience during my time.

“Di ba we had a signing of autographs sa opening day?

“After natapos, I couldn’t go out!

PLAYING AN EXTRA. But guess what was Gloria’s most unforgettable moment at Sampaguita?

“My first day in Sampaguita as an extra,” she replied.

Gloria recalled how she was discovered by Sampaguita Pictures matriarch Azucena Vera-Perez, whom the actress refers to simply as “Mrs. Vera.”

“I have an uncle who works at the editing room. Ni-nag ko siya hangga’t di niya ko dinala sa studio, because I wanted to be a movie star.

“Tamang-tama, Mrs. Vera was there waiting for her car. Pinakilala ako.

“Para sa akin, I wanted to embrace her and kiss her, and [I] said, 'Maraming salamat po talaga! Ito ang pangarap ko.’

“I couldn’t sleep the whole night, thinking that I’m going to Sampaguita Pictures the next day.

“Just being there para sa akin is enough.”

Gloria’s first movie as an extra was Kasintahan sa Pangarap.

She was supposed to be an unknown face in the crowd until somebody from the production staff said, “Gloria, yung aming extra ay hindi dumating. Magiging nurse ka.”

Gloria felt better when the production staff told her she won’t deliver any line. She will just assist the doctor.

But the director wanted Gloria to deliver just one line of dialogue.

“Kapag sinabi ni Pancho na, ‘Nurse, you have to give the patient this tablet,’ ang isasagot ko, ‘Yes, doctor.’”

That was first line she delivered in her 65-year movie career.

Gloria has fond memories of the movie’s premiere night.

“All the girls were in one bus and the boys were in another bus.

“I always want to stay near the window.

Gloria asked the press to guess the identity of the boy she was talking about.

Before anyone can answer, the veteran actress revealed it was National Artist for Film Lino Brocka no less.

Gloria recalled, laughing, “When I was working with him, he told me that story.

VERSATILITY. Now that the main entertainment medium is television, Gloria has remained in demand because she can switch from drama to comedy and vice-versa with ease.

In fact, she plays Elizabeth McBride in GMA’s long-running afternoon soap opera The Half Sisters.

Even if she’s a respected veteran actress, Gloria doesn’t ask for special treatment on the set.

She works during holidays if she has to.

“Kasi ayoko naman masira ang istorya because of me,” she said.

She can also extend her 12 midnight cut-off when taping.

“It depends if there is a big scene.

“When they say ‘Tita Gloria, ma-e-extend nang konti because there is a big scene.’ [I say,] ‘Okay.’

“So ang ginagawa ko, I take a nap [while waiting].

ARTISTS NOWAND THEN. Gloria has no problem working with teen stars Barbie Forteza, Thea Tolentino, Andre Paras, and Ruru Madrid in The Half Sisters, .

“Dito sa mga kasama ko, they are so professional.

“They are so behaved.”

She further described her younger co-stars.

“They come on time. They know their lines.

“Drop script ha! They can do that!

“They’ve been doing it for three times a week, could you imagine?

She explained why these teen stars respect their senior counterparts.