Paulo Avelino on showbiz controversies: "They don't know half of what's happening or they just assume."

Paulo Avelino is one of the most in-demand actors of his generation, he is raking it in, and he loves acting.

But, lately, he has been vocal about wanting to drop out.

The Kapamilya actor said, smiling, "I do. Until now."

He was also in the lead cast of Asintado, an afternoon Kapamilya teleserye, but he just left the show as he's slated for a major role in the upcoming ABS-CBN prime time series, The General's Daughter, top-billed by Angel Locsin.

Why quit in the middle of all that?

He explained, "Medyo na-burn out ako for the past few months because I am doing a soap.

"I am finishing two films—this one, Goyo, and the other one is Kasal.

Understandable, as there has not been a year since he moved to ABS-CBN in 2011 from GMA-7 when Paulo was not doing a teleserye or a movie, oftentimes simultaneously.

Paulo was hazy about his stint in the Kapuso reality show, Starstruck Season 4, which hailed his fellow Avengers Aljur Abrenica, Jewel Mische, Kris Bernal, and Martin Escudero as Ultimate Survivors.

After 12 years, today, all that Paulo could remember about those days was being carefree back then.

And now at 30, does he already have a clear picture of what he wants in life?

"Well, I definitely have goals. But it's not really a big goal that I have to target or I have to reach it." 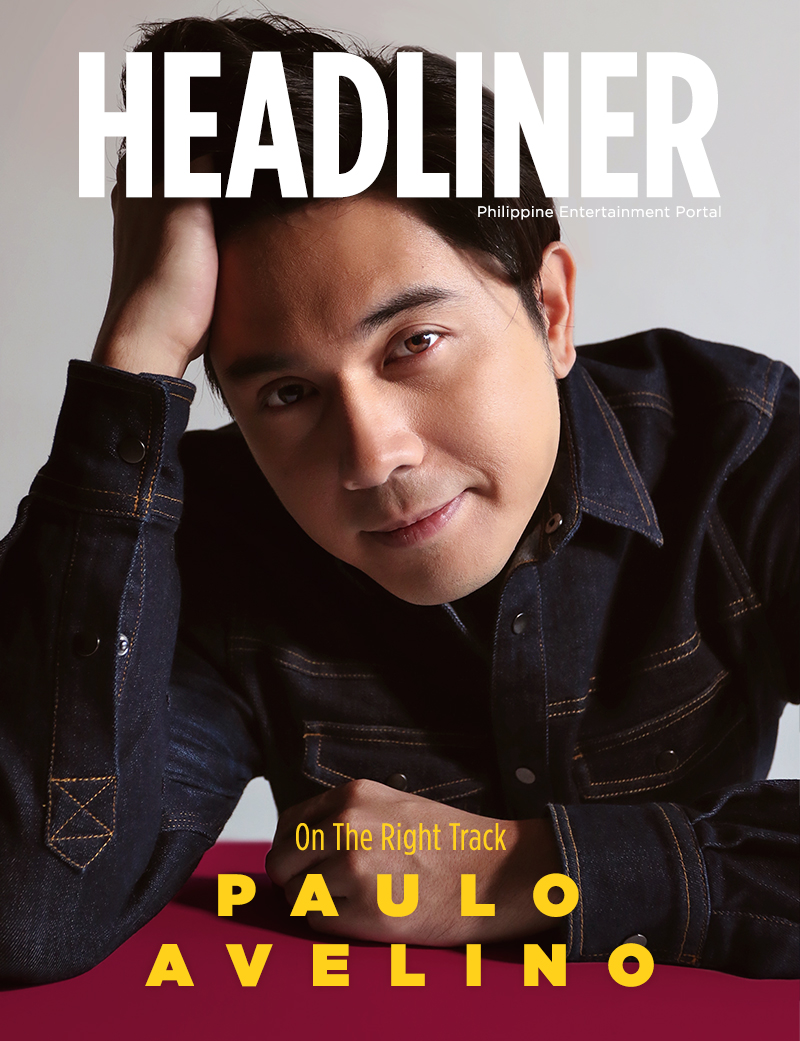 For a guy who is not obsessed with superstardom, he has been getting coveted roles—from the psychotic husband of Julia Montes in Walang Hanggan (2012) and a loving father to child star Raikko Mateo in Honesto (2013) to playing star-crossed lovers with Bea Alonzo in Sana Bukas Pa Ang Kahapon (2014), a conflicted long-lost brother of Jericho Rosales in Bridges of Love (2015), and an immortal man in The Promise of Forever (2017).

It cannot be denied that his home network has been tapping him to headline a string of major teleseryes and milking him for all he’s got.

But then he has also been a sought-after actor by indie and big-budget movie makers who scout talents from a wider field.

"But a film is a film, whether it's mainstream or an indie.

"Nowadays, hindi mo na mahiwalay pareho; it took some time for me to realize that as well.

"We have good materials sa mainstream, and not just on indie."

For Paulo, the more unpredictable the role, the better. His only requirement: "I just look for something new to play each time I accept an acting project."

The movie Goyo: Ang Batang Heneral is a bench marker for Paulo, who plays the Philippine hero Gregorio del Pilar.

The eponymous movie is the second installment of Direk Jerrold's trilogy on Philippine history following the huge success of Heneral Luna, headlined by John Arcilla in 2015.

Paulo admitted to feeling nervous about how the moviegoers would respond this time around to his movie, which unravels a flawed hero battling between his own vanity and duty to the country.

"But I have high hopes for Goyo, I'm not expecting that it would have the same impact as Heneral Luna because it has a totally different theme."

Having read up on and studied thoroughly the life of the young hero in preparation for his role, Paulo elaborated, "Kasi very internal ang Goyo: Ang Batang Heneral sa nakikita ko.

"At the same time, it encourages moviegoers to do their own research, to see if the events shown in the film actually happened or there is a different side of the story." 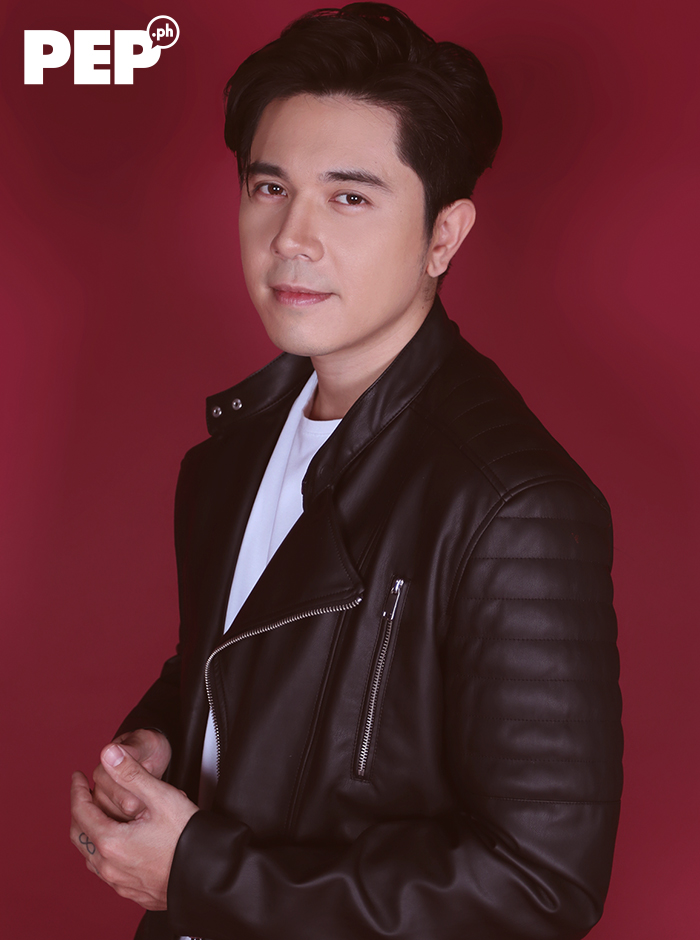 We have known this side of Paulo, the reluctant celebrity who would avoid calling attention to himself if he could help it. He did ride his conspicuously pricey motorbike to keep his appointment for the Headliner pictorial, but he cruised the streets going to Barrio Kapitolyo incognito, with his black helmet covering his face.

He casually strode in at the Summit studio clad in plain black shirt, jeans, and sneakers, and went straight to the dressing room without fanfare. Accustomed to the idle routine of being groomed, he graciously surrendered to the ministration of the stylist and whiled away the time playing some mobile game.

During the shoot, Paulo was a total pro—he followed instruction, posing this way and that.

He was focused, but did not make a fuss when the momentum was briefly disrupted by a commotion caused by the sounds of a heavy truck and concrete wall being taken down from a building site adjacent to the studio.

In fact, Paulo made coaching him easy for PEP.ph's resident photographer and art director. A natural for the thematic mood of the four-layout shoot—pensive, brooding, intriguing—all he had to do was project himself.

No stranger to intrigues, Paulo explained how he stays undettered no matter what.

"Siguro halfway into my showbiz career, I learned just not to mind things and just do things that I'm passionate about and happy about."

"Of course, without totally disregarding your supporters or getting constructive criticisms from probably social media and critics...

"I don't really care about people meddling with my private my life because they don't know half of what’s happening or they just assume.

"I just try to focus on work." 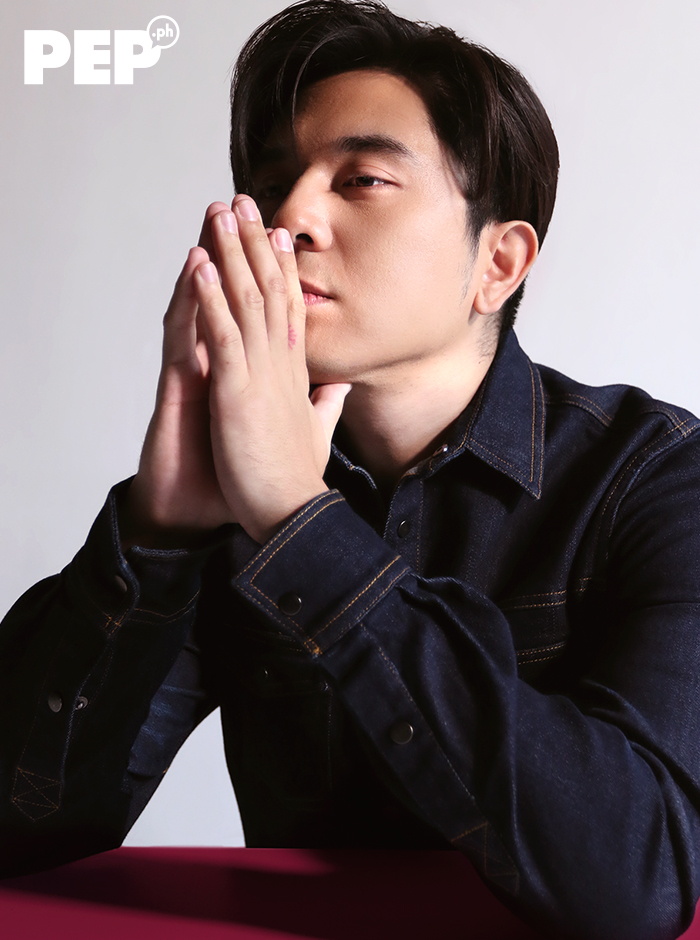 Without missing a beat, Paulo finished the last layout, playfully brushed his fingers on his jet-black hair and smiled for the camera.

He looked every inch the dapper heartthrob who has been making many a female fan's heart go pitter-patter.

Remember when he judged Binibining Pilipinas 2017, and trended on Twitter?

A fan wrote: "They all deserve it, but I deserve Paulo Avelino more."

READ: Paulo Avelino is the hottest meme from Binibining Pilipinas 2017

Has an overly aggressive female fan ever stalked him?

But he did admit to getting all sorts of messages from girls whenever he's on Twitch, a live-streaming online app where Paulo publicly posts his gaming sessions.

In a previous interview with PEP.ph, Jodie had said Paulo has been an "incredible" and "supportive" boyfriend to her.

The couple marked their first anniversary as a couple last May.

Wanting to keep their relationship as low-key as possible, Paulo has been consistent about not mentioning much about Jodie in media interviews.

But for PEP.ph Headliner, he said this much about his relationship with Jodie, "Yeah, relaxed lang, maganda rin… na wala rin sa industriya yung ka-partner ko.

"I just think, for myself, it’s more stress-free that way."

Has the cultural barrier ever been a problem to them?

"Konti. Pero she grew up with her mom. Her mom’s Filipina. So kulturang Pilipino pa rin kahit papaano." 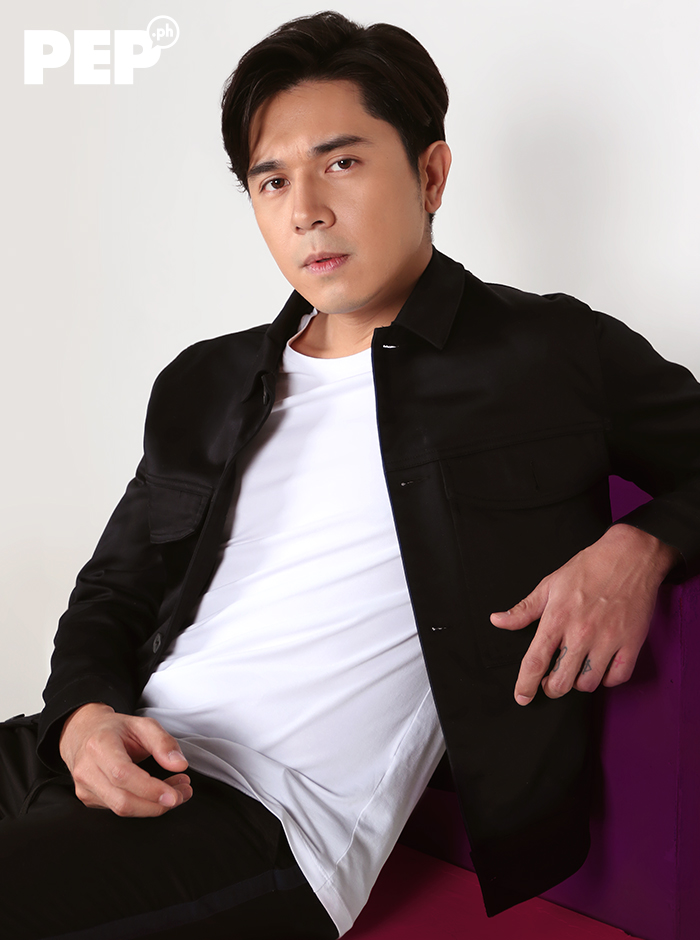 Paulo is in showbiz, but he is not showbiz. He appears aloof, distant to some people.

Once he posted on Instagram a strong "I-don’t-give-a-fuck" statement. What gives?

Something has been eating him, this yearning for a fuller life, without having the need to work as if his life depended on it.

Paulo's motivation, on the other hand, is a simpler one.

"Parang there comes a point in your life, hindi naman sa sobrang laki ng kinita ko sa showbiz, I’m still struggling in terms of monetary or like some other stuff.

"Kung may darating na bonus, then I would call it bonus.

To clear his mind off things, when he's feeling particularly vulnerable, Paulo takes to the road on his 2016 Norton Commando 961 Café Racer, a British-made bike priced at more or less USD 21,395 (PHP 1.13 million).

He would get lost in computer games at home and release his inner child in the role-playing shooting game Escape to Tarkov, his favorite.

The 30-year-old actor said he has lost count of the keyboards he broke for this diversion.

And trust Paulo, even as an avid gamer, to instill discipline in his playtime—four hours max.

Explaining his fascination for this game, Paulo said, "What's nice about it is you're creating your own world.

"Pag marami kang problema, you get to focus on it. 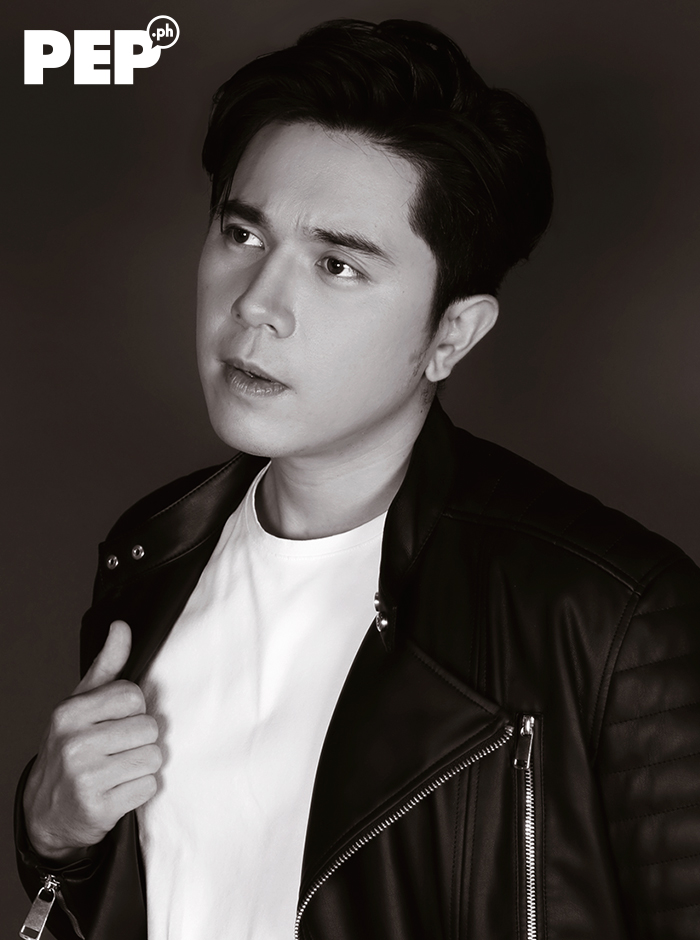 On this rare occasion that he let down his guard, he remembers his childhood.

We reminded him about one of his tweets, about being okay with feeling vulnerable and disappointed when life would throw you a curveball.

Quoting an American writer named Malanda Jeane-Claude, he wrote: "It's not weak to feel so much, neither is it your fault when people don't reciprocate what you give. Don't punish yourself where people fail."

Paulo explained that he just became more mindful of his social media followers who might be going through difficult times.

"That's the thing, parang… it became a big thing after it was tackled in Eat Bulaga! last year.

"There are a lot of people who are going through depression or mental health issues.

"It's nice to post a quote on Instagram and Twitter that would encourage them or inspire them and make them feel that there’s more to life than what they are feeling right now or what they are going through right now."

It may be a small thing, but to Paulo, a dose of positivity can make all the difference in the world.

He said the "best compliment" he ever got was when someone told him, "You are on the right track." 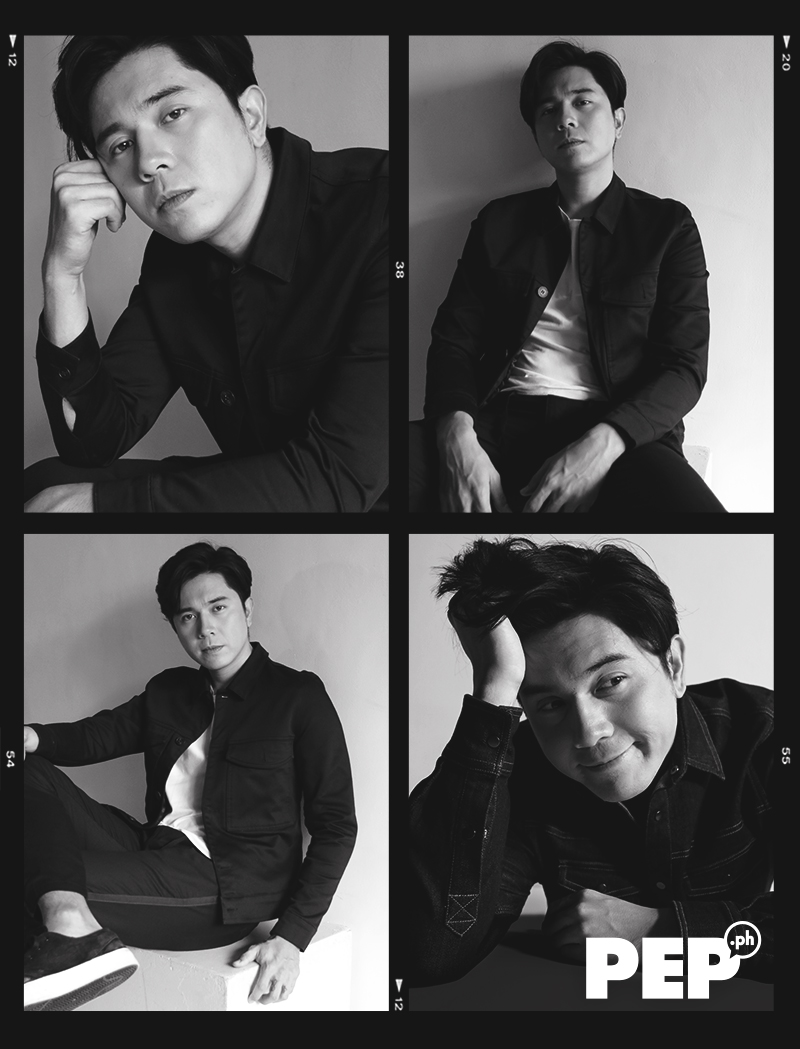