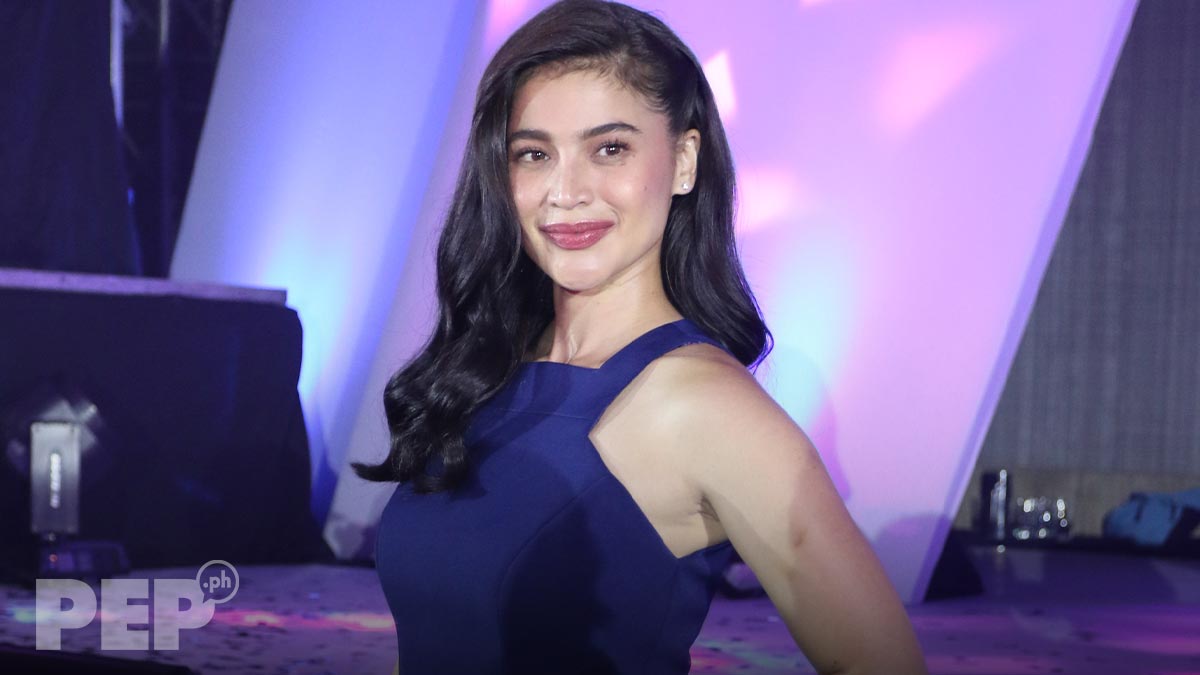 At 34, Anne Curtis is shrugging off the signs of aging, a line or two that began appearing on her face when she turned 30.

"It’s happening, but I don’t mind," she told PEP.ph (Philippine Entertainment Portal) and other members of the press in a recent interview.

"It’s part of the aging process and as long as you're happy and content, and you know how to take care of yourself, you'd stay youthful pa din."

Aware of how important it is for celebrities like her to always look presentable and youthful, Anne shared she has been taking extra effort to take care of her skin.

Her face, after all, is one of her biggest assets as one of the country's most influential celebrities on social media.

In fact, Anne has just been launched as the newest face of Belo Thermage FLX, a non-invasive treatment which gives your face an instant lift.

"There's an instant lift on your face which I think is nice," she said, "And it's not drastic, yung parang, 'Oh my gosh, ano ba 'to?'

"And it's perfect 'cause it adds collagen to your face. It parang reawakens the collagen."

What does collagen do to skin?

Collagen is the most abundant protein in skin, making up 75 to 80 percent of the organ. It is found in the dermis or middle layer of skin, and is responsible for making it plump and youthful-looking.

Our bodies produce new collagen every day, but as we get older, we lose more collagen than we produce.

Dra. Vicki Belo affirmed that by the time we reach the age of 25, our body has lost at least 25 percent of our collagen, and this triggers the signs of aging.

At 30, frown lines and laugh lines start to appear on our faces due to facial expressions. At this stage, our skin also loses volume and elasticity.

How to boost collagen production?

Unfortunately, there's no suffucient study backing up the claims of pills and powders.

An article posted on HuffPost.com said it's better to change our diet to slow down the loss of collagen. "Fish that you eat, such as tuna, salmon, or fish oil supplements, are high in omega-3 fatty acids and vitamin A. Omega-3 fatty acids have anti-inflammatory properties and vitamin A also helps to scavenge free radicals, both of which can prevent loss or degradation of collagen."

On the other hand, smoking kills it, and eats away proteins.

Sugar, according to Cosmopolitan.com, "can permanently attach to collagen," and make it "rigid and inflexible, resulting in dull, dry and aging skin."

At the launch of Anne's latest endorsement last April 24, at Shangri-la at The Fort in Bonifacio Global City, Taguig, she revealed asking Dra. Vicki Belo about the treatment's benefits before giving it a try.

Anne said, "Siyempre, pina-explain ko muna kay Dra. Belo what is the benefit of the machine.

"For women my age, 34 onwards, actually, 30 onwards, you start to lose collagen.

"And especially me, someone with my lifestyle na I'm always puyat, I'm always running, and working out, you lose collagen. It helps reboost that."

Anne later added, "When you feel it, it looks scary.

"But there's a cooling sensation to it so you don't feel the pain of the machine."

Dra. Belo further explained why she recommended Thermage to Anne.

"She's also one of these people who is mestiza, who runs a lot under the sun.

"So, of course, she experiences sun damage already. And then she gains weight and loses weight all the time.

"It's like every time she travels, she eats everything she wants. And then, she'll gain like 15 pounds.

"And then she loses it all in like two weeks after coming home."

What does the treatment do?

"These are the basic building blocks of your skin. And as you get older, especially with sun damage, nasisira yung mga cells, yung factories.

"The Thermage wakes it up, and that's why the final results... Like I did my Thermage, I can feel it tightening and tightening. I can see it getting better."

To get maximum result from the treatment, it should be done once evey six months, depending on how much you need it.

The treatment can also be done on the body and not just on the face.

The beauty doctor explained, "We always tell the patients, at three months, you'll see it much better. At six months, that's your maximum effect na.

"But it will be much better than the first month that you build it because your building blocks are putting protein in your skin, collage, elastin."

Aside from Anne, other well-known celebrities who have tried the Belo Thermage treatment are Iza Calzado, Marian Rivera, Korina Sanchez, and Sue Ramirez.

Anne said she has been getting skin-care treatments from since she was 16 or 17, "when I was getting my first mga acne and pimples."

Dra. Belo confirmed, "Anne kasi doesn't want to touch her face, e. As much as possible, she only wants to do facials."

In a previous interview with PEP.ph, Anne said she does not see herself going under the knife.

But she clarified that she does not see anything wrong if other people choose to do so for vanity's sake.

She said, "I think I respect anyone's decision who wants to better themselves through that way, kanya-kanya naman yun. e.

"Whatever floats your boat, whatever makes you happy, then that’s what you pursue, di ba?

"Just as long as you’re happy with who you are, okay na yun."

"I don’t think anyone has the right to judge you for the decisions you make."